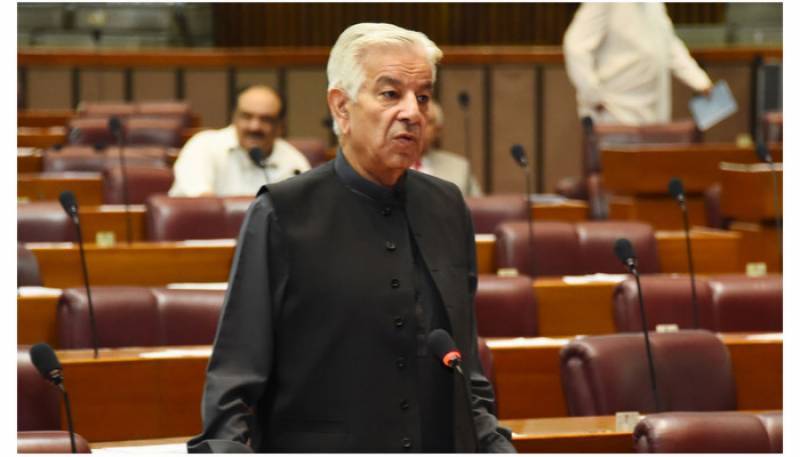 Islamabad (Web Desk): Defence Minister Khawaja Muhammad Asif on Friday called for a transparent inquiry into the incident of firing on Pakistan Tehreek-e-Insaf's (PTI) long march to expose the real culprits behind this crime.

Speaking during the session of the National Assembly (NA), he said using this incident for political gains and hurling baseless accusations against the prime minister, the interior minister, and others should be avoided.

The minister said said a Joint Investigation Team (JIT) hould be constituted in order to ensure transparent and credible probe to apprehend culprits involved in this incident.

“Don’t turn this incident into a victim of politics. Go after the suspects. Constitute a JIT. But if this incident is being used to defame an individual or institution, then I will condemn it,” he added.

Asif also called out Punjab CM Pervaiz Elahi for suspending the staff of a police station after a statement of the suspect was leaked on social media.

Speaking on the floor of the House, Noor Alam Khan said it is highly regrettable that workers of a political party are involved in running a defamatory campaign against officers of state institutions.

He said protests outside senior officers of security institutions are regrettable.

Condemning firing on PTI’s march, Pakistan Peoples Party's (PPP) Shazia Marri said there should be no violence in protest demonstrations. She said the firing incident should be thoroughly probed.

Meanwhile, the PTI has announced nationwide protest from today after Friday prayers.

“Today, after the Friday prayer, there will be a protest in the whole country. Until Imran Khan's demand is met, nationwide protests will continue,” Asad Umar wrote.

Former premier Imran Khan was wounded in a gun attack during the PTI's protest long march in Wazirabad on Thursday.

The attack left several people, including the PTI chief and some other party leaders, wounded. A party activist lost his life in the deadly attack.

Senator Faisal Javed and other party leaders including Umar Dar and Ahmed Chattah, were among the people injured in the incident while a citizen, identified as 42-year-old Moazzam, died on the spot.