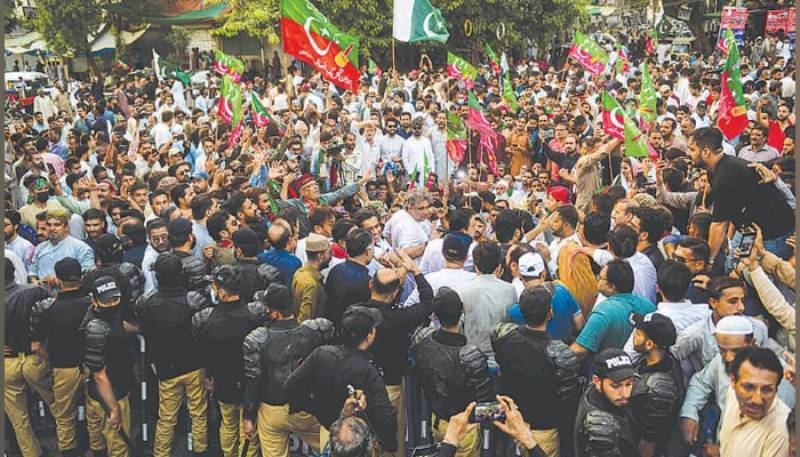 According to reports, PTI supporters gathered near the Peshawar Toll Plaza to protest against the assassination attempt on party chief.

The protesters chanted slogans against the government, saying that the Constitution gives them the right to peaceful protest.

In a tweet, it called on protesters are to not set fire to vehicles.

It also called upon the authorities in Rawalpindi, which falls under the PTI-allied Pakistan Muslim League-Quaid (PML-Q) provincial government, to stop the pelting of stones.

“Rawalpindi authorities have been repeatedly requested to stop the stone pelting on behalf of Rawalpindi,” it said. “Stone pelting in the presence of public representatives is a sad thing.”

In Lahore, protesters burnt tyres outside the Governor House while some demonstrators tried to break into the building and broke CCTV cameras.

A  clash between the police and protesters was reported as well.

PTI supporters in Karachi are also protesting against the attempted assassination of party chief Imran Khan outside the Insaf House at Nursery today.

They have said that the demonstration would continue until Imran’s demands are accepted.

According to television reports, the police were trying to prevent protesters from reaching Metropole, and demonstrators had pelted stones.

Earlier, In a tweet, PTI General Secretary Asad Umar wrote that nationwide protests will be held after Friday prayers today and that demonstrations will continue until the demand of PTI Chairman Imran Khan is met.

“Today, after the Friday prayer, there will be a protest in the whole country. Until Imran Khan's demand is met, nationwide protests will continue,” Umar said.

In a post on Twitter, he said that and said the party has called for a nationwide strike after Friday prayers, further urging every Pakistani to participate in this protest.

No backchannel diplomacy between Islamabad and New Delhi, says Khar