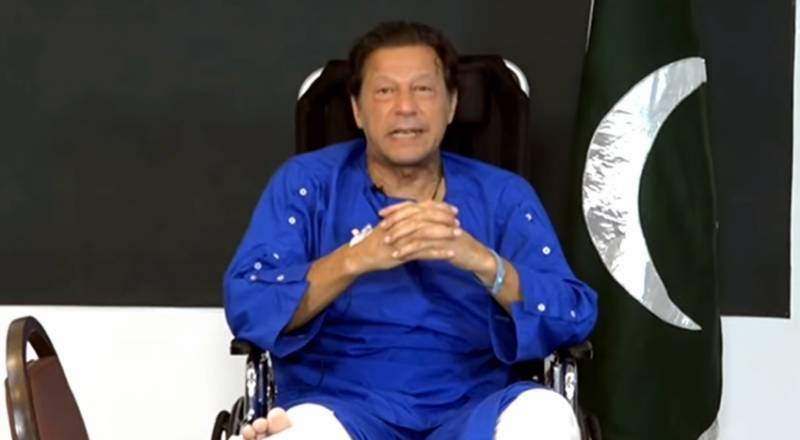 Lahore (Web Desk): Pakistan Tehreek-e-Insaf (PTI) chief Imran Khan on Friday stated that he will resume his Azadi march again once he recovers from injuries.

In his first address since the assassination attempt, the PTI chief said that he had already learned that there was a plan in place to kill me somewhere between Wazirabad and Gujrat,"

Imran Khan said that that the “government and its handlers” had planned to get him murdered in the same way former Punjab governor Salman Taseer was killed.

"Firstly, they accused me of blasphemy. They made tapes and released them and Pakistan Muslim League-Nawaz (PML-N) projected it, I knew who was doing it," he said.

Imran said that he had already narrated this plan to the public during a September 24 rally.

"This happened exactly according to the script," the former premier prime minister said.

Describing the gun attack on him during the long march, Imran Khan said that he was on the container when a "burst of bullets" was directed at him, causing him to get shot in the leg and fall down.

"Then a second burst comes, there were two people." the former premier said , adding that that if the two bullet sprays had been synchronized, he would not have survived.

"Because I fell down, I think the shooter thought I had died and fled," Imran Khan said.

The PTI chief said that one suspect, claiming to be an extremist, had been arrested.

"He is not an extremist. There was a plan behind the attempt [and] we will uncover it."

The former premier said that three others, separate from the ones who he had named in a tape stashed abroad, had plotted to kill him.

"How did I find out? Insiders told me. The day before Wazirabad, they made the plan to kill me as they saw the number of people increasing using the script of religious extremism."

The PTI chief called on Chief Justice of Pakistan (CJP) Umar Ata Bandial, saying that the leader of the country’s biggest party was “not getting justice”.

"CJP, whatever was done to me in the last six months, I can assure you it has never been done by the country even with an enemy".

Imran Khan has said that the nation has finally stood up and now has two paths before it: a peaceful or a bloody revolution.

"There is no third way. I have seen this nation wake up and this genie of awareness won’t go back in the bottle".

"Now decide if we can bring change in a peaceful way through the ballot box and fair and free election or through chaos," the former premier asked.

Imran Khan vowed to take to the streets once again after recovering from the attack on his life.

"As soon as I get well, I will give the call for the Islamabad and come out onto the streets," he said, adding that Pakistan "wasn't made for slavery," the PTI chief said.