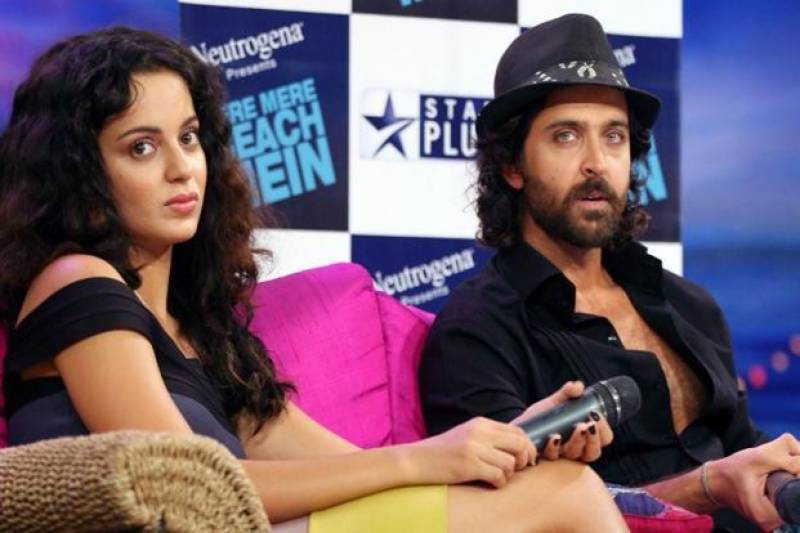 New Delhi (Web Desk): Hrithik Roshan is alleging that he was stalked and hounded by Kangana Rananut, according to a 29-page complaint filed by the actor and his legal counsel, a new report says.

The Indian media reported, Hrithik Roshan is alleging that he was stalked and hounded by Kangana Rananut, according to a 29-page complaint filed by the actor and his legal counsel, a new report says.

According to a Republic report, sources have confirmed that the complaint was filed by Mahesh Jethmalani, Hrithik’s counsel in April, 2016. The complaint also alleges that Kangana sent Hrithik ‘sexually explicit’ emails in which she called him her ‘eternal lover’. Hrithik was ‘repulsed but out of decency ignored those mails’.

The first part of the letter was published by Republic on their website. You can read it in its entirety here.

According to the complaint, Hrithik and Kangana were first introduced to each other in 2009, prior to filming their movie Kites. They would go on to star together in Krrish 3, following which their relationship soured when Kangana spoke in public about her ‘silly ex’ which Hrithik took as insinuation of their affair.

The actors entered into a legal battle with each other. Kangana, on the press tour for her new film Simran, provided more details about the fiasco to the media. She alleged that she had gone to Hrithik’s father, Rakesh Roshan, for help, and while he had initially assured her that he would arrange for a meeting between the two, had put all his efforts into launching a legal attack against her.

The complaint says that between 2009 and 2013, Hrithik and Kangana only came in contact with each other for professional reasons. But in 2014, Hrithik allegedly began receiving abusive messages (in Hindi) from Kangana.

“Our Client then received a surprising email from Ms Rangoli Ranaut (Kangana’s sister), accusing him of “emotionally and psychologically raping” Ms Ranaut,” the letter says. “Our Client, out of sheer concern for his colleague, had done his best in order to help the situation. Not only had he offered to personally meet and discuss the matter, but also contacted the Cyber Cell for advice. On receiving such an absurd and misconceived email, replete with false allegations, Our Client decided that it was not worth his while to deal with such an unreasonable person and decided to ignore the entire issue.”

The complaint continues to allege that Kangana had been interacting with an imposter, and not Hrithik - an allegation that Kangana has denied. She has also said that no evidence of the imposter’s existence has been found by the authorities.

Kangana’s counsel, Rizwan Siddiqui gave a statement, shared on Twitter, saying that the letter has been in public domain since April 2016, and publishing the letter was merely an attempt by Republic TV to gain TRPs.

“It is quite surprising to note that some electronic news channel is trying to create a media feeding frenzy, concerning an old police complaint which was filed by Mr. Hrithik Roshan sometime early in the year 2016, to miserably create a fresh story and get TRPs for their channel. Be as it may, I want to clarify to other electronic media channels and other print publications that the said old police complaint concerning an imposter, which was filed by Mr. Hrithik Roshan has been dealt with by my client, as per the legal procedure provided. Also, all others should not get confused by the random and out of context questions that may be miserably raised by the channel for obvious reasons. All answers to the questions are available on public platform since early 2016 and it is not prudent on the part of my client to repeat the same things all over again. If Mr. Hrithik really wants to clear his name then he has to simply answer the questions which were publicly put to him at that stage. The said unanswered questions are also available on public domain since April 2016.”

Rangoli Chandel posted a message for Hrithik on Twitter:

Hrithik, his father responsible for my dirty PR: Kangana

‘It’s possible to be united even if you have different ideas,’ ...