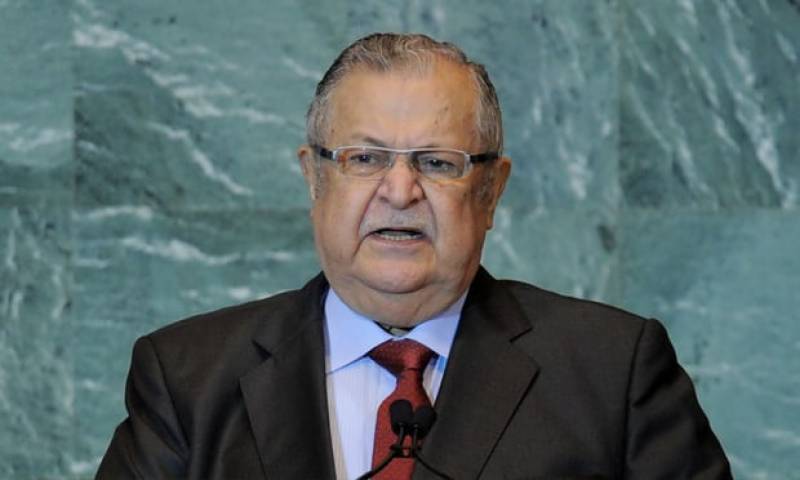 Baghdad (Web Desk): Jalal Talabani, the Kurdish former president of Iraq and its first non-Arab head of state, has died. He was 83.

The ‘Guardian’ reported that the leader of one of Iraq’s main Kurdish factions died in a hospital in Berlin after his health rapidly deteriorated, a relative told the Associated Press. He had a stroke in 2012 and was moved to Germany for treatment. He was replaced in 2014 by President Fuad Masum.

Talabani, a law school graduate, was a key figure in the transitional governing council that drafted the new Iraqi constitution after the overthrow of Saddam Hussein in 2003, and was later voted into what was supposed to be a largely ceremonial position of president of Iraq by the country’s newly constituted parliament in 2005.

The elder statesman of Iraqi politics survived decades of guerrilla warfare and bitter infighting, first taking up arms against the central government and then a fractious civil war between Kurdish factions in the 1990s, where he led the Patriotic Union of Kurdistan (PUK). He also survived brutal purges and chemical attacks aimed at Iraq’s Kurds by Saddam Hussein.

After becoming the country’s sixth president, he tried to steer a divided nation through years of civil war and insurgency led by al-Qaida in Iraq, the precursor to Islamic State (Isis), and the conflagration initiated by the American occupation. Isis would later re-emerge with a vengeance, conquering large swaths of Iraq in 2014.

His death came days after a landmark but non-binding referendum in Iraqi Kurdistan, where voters overwhelmingly backed calls for the region’s independence from Baghdad, a key theme of Kurdish politics for decades that now appears within reach. The referendum and its result has angered Iraqi Kurdistan’s neighbours in Turkey and Iran, who fear their own Kurdish communities will demand self-rule.

“We are saddened for Mam Jalal Talabani’s pass[ing] away,” said Hemin Hawrami, a top aide of Masoud Barzani, the president of Iraqi Kurdistan, using a term of endearment for the Kurdish leader that translates to “uncle”.

“Kurdistan in this juncture needed more than before his wisdom and excellent cooperation with President Barzani to lead the post-referendum process. Rest in peace.”

Talabani was born in a village near Sulaimaniya. He is survived by his wife, Hero, and two sons.