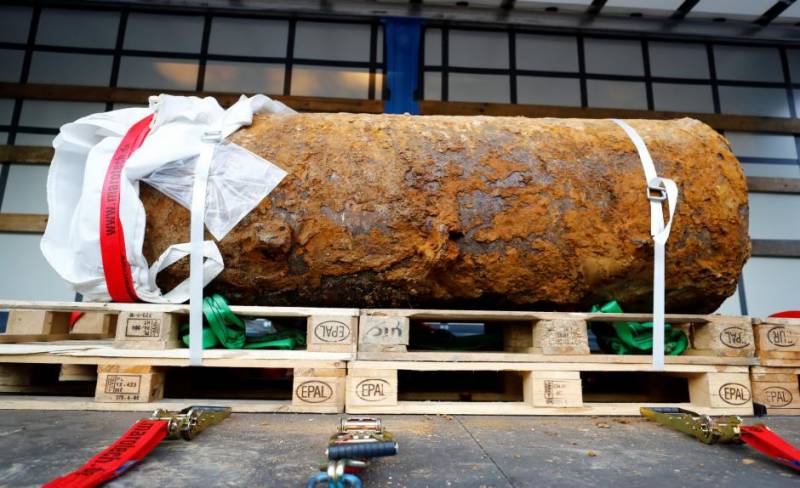 Frankfurt, Germany (Reuters): German explosives experts defused a massive World War Two bomb in the financial capital of Frankfurt on Sunday after tens of thousands of people were evacuated from their homes.

The compulsory evacuation of 60,000 people was Germany’s biggest such maneuver since the war, with more than a thousand emergency service workers helping to clear the area around the bomb, which was discovered on a building site last week.

The all-day effort took longer than planned but officials expressed relief that residents would start returning home before sundown and that the operation wouldn’t disrupt business on Monday.

The work by bomb technicians started later than scheduled because some residents refused to leave the evacuation area despite fire chiefs warning that an uncontrolled explosion would be big enough to flatten a city block. Police said they took stragglers into custody to secure the area.

More than 2,000 tonnes of live bombs and munitions are discovered each year in Germany, more than 70 years after the end of the war.

British and American warplanes pummeled the country with 1.5 million tonnes of bombs that killed 600,000 people. Officials estimate that 15 percent of the bombs failed to explode, some burrowing six meters (20 feet) deep.

Residents were instructed to leave their homes by 8 a.m. local time [0600 GMT], and more than a thousand emergency service workers helped to clear the area. Police set up cordons at a 1.5 km (roughly a mile) radius around the device.

Many residents left town. Others spent time in cafes on the edge of the evacuation zone. Museums were free, and many hotels offered discounts. The city set up a temporary shelter at Frankfurt’s trade fair site, serving bananas and beverages.

The device was found last week in the city’s leafy Westend neighborhood, home to many wealthy bankers.

Premature babies and intensive care patients had to be evacuated along with everyone else from two hospitals and rescue workers helped about 500 elderly people leave residences and care homes.

Bomb disposal experts used a special system to try and unscrew the fuses attached to the HC 4,000 bomb from a safe distance. If that had failed, a water jet would have been used to cut the fuses.

The bomb was dropped by Britain’s Royal Air Force during the 1939-45 war, city officials said.

In July, a kindergarten was evacuated after teachers discovered an unexploded World War Two bomb on a shelf among some toys.

Three police explosives experts in Goettingen were killed in 2010 while preparing to defuse a 1,000 lb (450 kg) bomb.