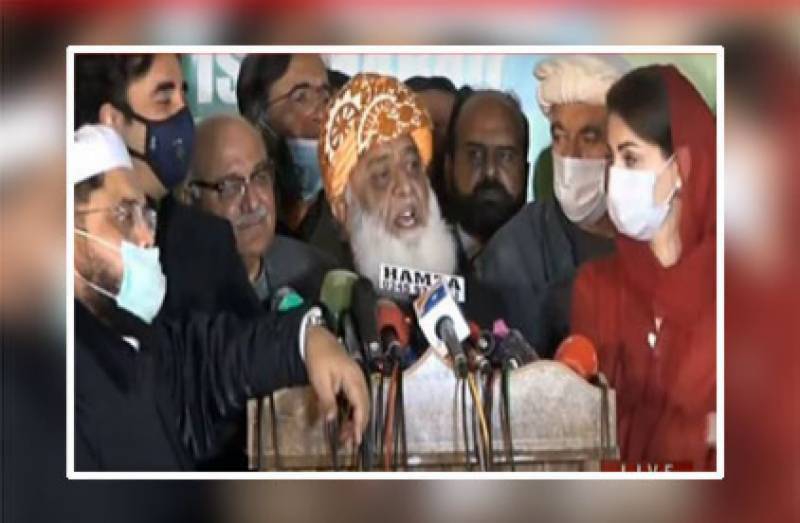 According to details, the notices have been sent by Pakistan Muslim League-Nawaz (PML-N) leader and Secretary General PDM Shahid Khaqan Abbasi following the approval by PDM chief Maulana Fazlur Rehman.

As per the objection raised in the notice, PPP has been asked to explain within a week, the appointment of its candidate Yousuf Raza Gilani, as Leader of Opposition in Senate, by defying the consensus decision by other parties of the Opposition alliance.

Meanwhile, a similar notice has also been issued to the ANP directing it to clarify why it had supported PPP in this move.

Last week, the PDM decided to part ways with the PPP and ANP, and form a new alliance of five opposition parties having 27 members in the Senate.

The decisions were taken at a meeting of senators of five opposition parties, minus the PPP and the ANP.

In March, the PDM had decided that the PPP will get the slot of chairman Senate while the deputy chairman will go to JUI-F and the PML-N will get the office of the leader of Opposition.

The PPP and JUI-F candidates for the two slots couldn’t succeed in polls, as the presiding officer discarded seven votes of the PPP candidate Senator Yusuf Raza Gilani.

However, the PPP backed out of consensus understanding and opted to get the slot of the Opposition leader by roping in some members of Balochistan Awami Party (BAP), which is part of the government.

Speaking to newsmen outside Parliament House, Shahid Khaqan confirmed that the notices have been issued to both parties.

"Whatever answer is received will be presented during a meeting of the opposition alliance's constituent parties," he said, adding that he PDM will decide the future course of action.

Meanwhile, leader of the Opposition in the Senate Yousuf Raza Gilani also confirmed that the PPP had received the notice.