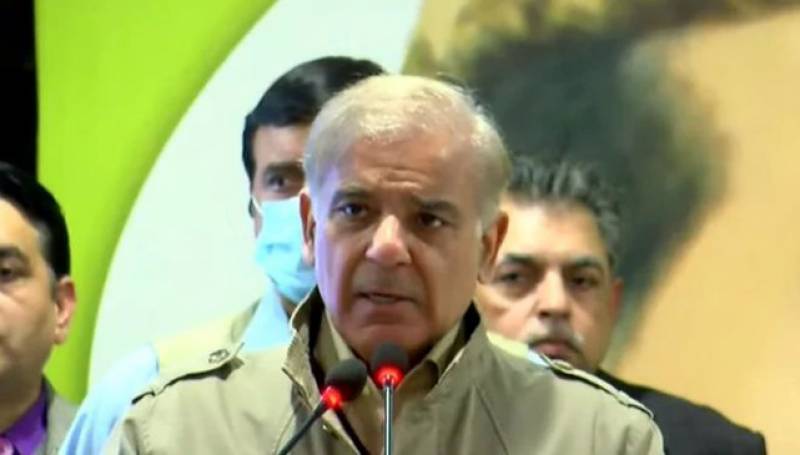 Speaking to journalists outside the premises of the Supreme Court (SC), the PM L-N leader said that the evidence should be made public if the 197 members of the Opposition parties were found 'traitors'.

"I demand COAS and DG ISI to take notice of this issue and produce evidence in the Supreme Court if we have committed treason," Shahbaz said, adding that he has never spoken such clear words before.

“If we did commit the crime, all evidence will come to light,” he said, requesting the Supreme Court to also investigate the matter.

The Opposition leader said: “It is now time for the army officials, who have made innumerable sacrifices, to clarify whether the National Security Committee (NSC) passed a resolution in which the role of Opposition in the ‘foreign conspiracy’ is stated.”

“Did they sign those minutes? See if it has the approval of the establishment?” he questioned.

Shehbaz Sharif said that that the opposition had been calling the current government “fake” for the past three years and that they were only called ‘traitors’ after they launched the no-trust move against Imran Khan.

He said that none of the Opposition leaders have committed treason. “We did not invite any foreign power and neither are we involved in any foreign conspiracy,” he said.

Responding to a question, Shehbaz Sharif said that he had not received any letter from President Dr Arif Alvi regarding the appointment of an interim prime minister.

Shehbaz dubbed both President Alvi and Prime Minister Imran Khan as violators of the Constitution.

He said that the Opposition is waiting for the decision of the Supreme Court to resolve the issue of the unconstitutional step taken by the president and prime minister and then the Opposition will talk about other matters.

If this matter is not resolved then this country will become a banana republic where deputy speaker and a federal minister blamed us of treason, the PML-N President said.