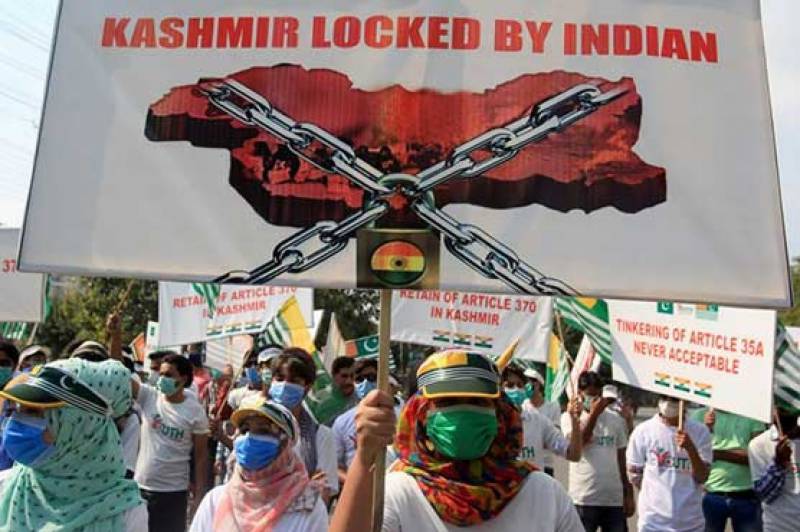 Islamabad (Web Desk): Kashmiris on both sides of the Line of Control (LoC) and all over the world are observing Youm-e-Istehsal today (Friday) to register their protest against Narendra Modi-led fascist Indian government's illegal action taken on this day in 2019.

The Modi regime in gross violation of the United Nations (UN) resolutions and international law scrapped Articles 370 and 35A of the Indian Constitution that granted special autonomous status to Indian Illegally Occupied Jammu and Kashmir (IIOJK) and imposed military siege in the territory on August 5, 2019.

All Parties Hurriyat Conference (APHC) has called for complete shutdown today to mark it as a black day.

Illegally detained APHC Chairman, Masarrat Aalam Butt, in a message from an Indian jail, said that August 5, 2019 is one of the blackest days in IIOJK.

"The purpose of observing the day as Youm-e-Istehsal-e-Kashmir is to sensitize the international community about New Delhi's brutal repression being carried out by its more than one million occupation troops in the territory," the APHC chief said.

Meanwhile, the Pakistani government has planned a series of activities including seminars and conferences to mark the Youm-e-Istehsal and express solidarity with the oppressed Kashmiri people while rallies in their support are being staged across the country with vibrant participation of people from all walks of life.

The whole nation will give a message to their Kashmiri brethren that the people of Pakistan will always stand with them in their just struggle for right to independence and against the atrocities committed by the Indian forces.

In connection with Youm-e-Istehsal, a rally was taken out from Foreign Office on the Constitution Avenue in Islamabad today to express solidarity with oppressed Kashmiri people.

People belonging to different walks of life including parliamentarians participated in the rally.

Carrying banners, the participants chanted slogans in support of Kashmiri people and against the Indian atrocities.

Addressing the rally at D-Chowk, Defense Minister Khawaja Asif said that Pakistan's commitment with Kashmir is everlasting and it will never dilute because of internal situation.

Speaking on the occasion, Adviser to the premier on Kashmir Affairs Qamar Zaman Kaira said that the Kashmiri people have been braving the Indian atrocities over the last seven decades and sacrificed over one hundred thousand lives.

He said every Pakistani is aware of its national responsibility and stands by their Kashmiri brothers and sisters.