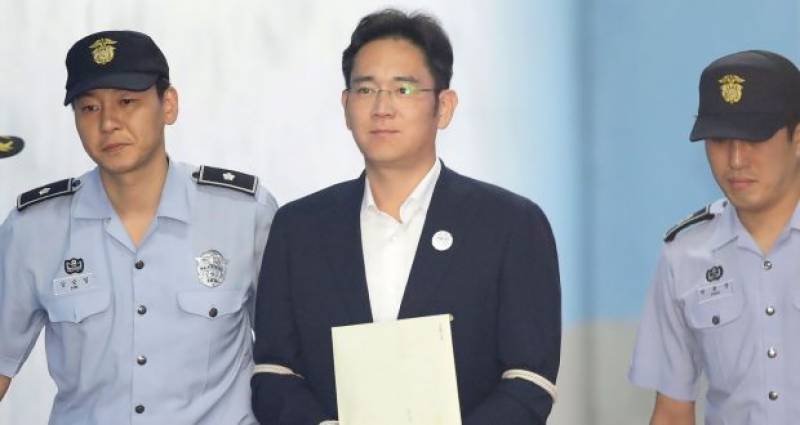 Seoul (Reuters): A South Korean appeals court on Monday suspended a jail sentence handed down to Samsung Group heir Jay Y. Lee, setting him free after a year’s detention amid a corruption scandal that brought down the former president.

Seoul High Court jailed Lee for two and a half years, reducing the original term by half, and suspended the sentence for charges including bribery and embezzlement for four years, meaning he does not have to serve time as long as he behaves.

Lee, 49, heir to one of the world’s biggest corporate empires, had been detained since last February.

Emerging from Seoul Detention Centre, Lee said his time in jail had been useful.

“Again, I feel sorry to everyone for not showing my best side. And it has been a really precious time for a year reflecting on myself,” Lee told reporters.

He added he needed to visit his ailing father, Samsung Group patriarch Lee Kun-hee, who suffered a heart attack in 2014.

“It’s a positive thing that the owner is returning,” said Greg Roh, a stock analyst at HMC Investment & Securities. “...it could be good that the owner returns to set standards in such a rapidly changing time.”

Shares in flagship Samsung Electronics, of which Lee is vice chairman, reversed earlier losses and closed up 0.5 percent compared to a 1.3 percent fall in the wider market.

President Park Geun-hye was dismissed in March after being impeached in a case that brought scrutiny to the cozy ties between South Korea’s chaebols - big family-owned corporate groups - and its political leaders.

Park, who denies wrongdoing, is standing trial accused of bribery, abuse of power and coercion.

A lower court in August convicted Lee of bribing Park, by supporting the equestrian career of the daughter of a friend of Park, in return for help in strengthening his control of Samsung Electronics, the crown jewel of the country’s largest conglomerate and one of the world’s biggest technology companies. He was also convicted of embezzlement and other charges.

But the appeals court said Lee did not solicit any such help. It also said just 3.6 billion won ($3.31 million) was paid as a bribe, not 7.2 billion as the lower court had said.

“Park threatened Samsung Electronics executives,” the judge said. “The defendant provided a bribe, knowing it was bribery to support (the friend’s daughter), but was unable to refuse.”

Prosecutors did not have an immediate comment. Lee’s lawyer, Lee In-jae, said the defense will appeal to the Supreme Court to try to overturn the convictions.

Lee, wearing a dark suit and white shirt and looking noticeably worn, did not show any emotion when the ruling was announced.

Prosecutors had sought a 12-year jail term for Lee.

Chung Sun-sup, CEO of research firm Chaebul.com, said he was disappointed with the ruling.

“It’s repeating the same old history, being lenient to the chaebol owners,” he said. “I think Lee has to show that he reassure to the public he can change the corporate culture.”

With the end of his year-long detention, which according to local media he adjusted to with physical workouts and reading books, Lee could continue with his existing roles, including as director of Samsung Electronics.