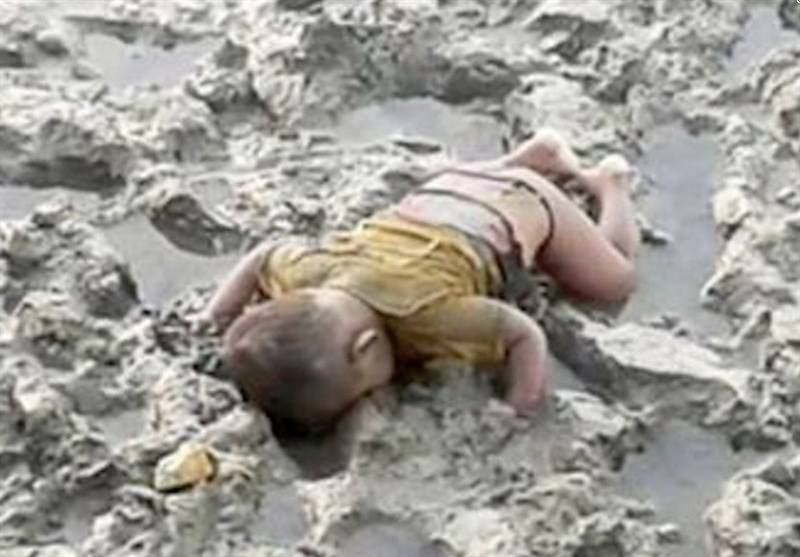 Tehran (Online) – A heartbreaking picture purporting to show a dead Rohingya child from Myanmar has evoked memories of ‘Aylan Kurdi’, a Syrian refugee who was found washed up on a Turkish coast after drowning in the Mediterranean Sea in 2015.

A baby boy lies still, face sink in the mud after washing up on a river bank.

A 16-month-old Rohingya refugee, Mohammed Shohayet, whose family fled their home for Bangladesh to escape the violence in Myanmar's Rakhine State, only to drown during the journey along with his mother, uncle and 3-year-old brother.

Mohammed's father, Zafor Alam told the media, "When I see the picture, I feel like I would rather die, there is no point in me living in this world."

The image has parallels with that of the young Syrian refugee Alan Kurdi, who was found dead on a Turkish beach in September 2015, after trying to flee the civil war at home.

The conflicts the two boys left behind are different, but the desperation of their families to escape is very familiar.

Myanmar's Muslim Rohingyas are considered one of the world's most persecuted minorities. The Myanmar government views them as Bengali immigrants, despite the fact that they've lived for generations in Myanmar's Rakhine State.

He further added, "My grandfather and grandmother were burnt to death. Our whole village was burnt by the military. Nothing left."

Zafor Alam said they ran from village to village trying to escape the violence.

Alam became separated from his family during the journey and made it to the Naf River which runs between Myanmar and Bangladesh. He says he began swimming and was picked up by Bangladeshi fishermen who took him across the border.

Then, he says he started the process to get his family across to safety.

Alam said that he requested the boatman and asked him to help his wife and sons so that they could cross the river. His family tried to make their escape.

When the Myanmar police got a sense that people were preparing to cross the river, they opened fire. The boatman took all people on board to escape the firing. The boat became overloaded. Then it sank.

A day later, he learned about the boat.

Alam's story of his family being torn apart trying to escape is one familiar to many Rohingya families who have made it across the border to Bangladesh.

The International Organization for Migration says some 34,000 people have crossed the border in recent weeks and months.

"Only the river knows how many dead bodies of Rohingyas are floating there," Alam said.