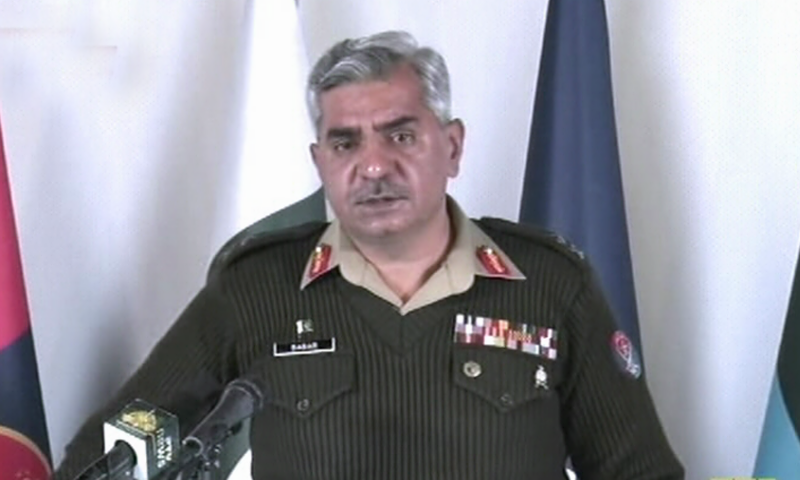 Briefing the media persons in Rawalpindi, he said that work under the western border management regime will be completed in the stipulated period.

Discussing issues related to the Pak-Afghan border, the DG ISPR said that work under the western border management regime will be completed in the stipulated period.

He said that the fencing work along the Pak-Afghan border is almost completed while over 71 per cent of the work on fencing has been completed along the Pak-Iran border.

"The fence on the Pak-Afghan border is needed to regulate security, border crossing and trade. The purpose of this is not to divide the people, but to protect them, he said."

The DG ISPR deemed the recent uprooting of the fence by Taliban fighters as "one or two localised problems," which he said is being discussed by the governments of both the countries.

Major General Babar Iftikhar said the border management system with Afghanistan will be made more effective with the passage of time.

“The blood of our martyrs is included in the erection of this fence,” the DG ISPR said, adding that this is a fence of peace and it will be completed and stay intact.

The DG ISPR said sixty seven new wings of FC Balochistan and FC Khyberpakhunkhwa were established in the year 2021 to further strengthen the border security. He said the process has also been started to establish six more wings.

Speaking about India, he termed Indian claims about infiltration through the Line of Control (LOC) ridiculous and called out the Indian Army for targeting innocent Kashmiri civilians.

He said the LOC remained calm throughout the year in 2021, but the Indian Army staged fake encounters. “Indian allegations hint at a political agenda,” the army spokesman said.

He said “We are not only aware of all these activities, but also know about their different linkages”, adding that some elements, including those who were in Pakistan and those who were outside the country, were relying on “half-truths, fake news, concocted false propaganda” to target institutions and important figures to harm Pakistan. “These people failed in the past and they will fail in the future.”

The presser of Pakistan Army spokesperson comes as Kashmiris and the world observes the Right to Self-Determination Day of Indian Occupied Kashmir. India repeatedly tried to divert attention from the atrocities in occupied Kashmir with false propaganda, he said.

India has killed innocent people as it attempted to externalize the indigenous freedom struggle of the Kashmiris", he said. DG ISPR also accused India of putting the region's peace at stake through its defense procurement saying it will have negative effects on peace. On the Line of Control, they have committed false propaganda about infiltration.

He also mentioned a fake encounter in Neelum Valley in the Kirin sector in which Indian forces killed an innocent Kashmiri and then blamed Pakistan.

Speaking about the operation, Gen Iftikhar said the operation was different from other operations as it was not area-specific or military-specific.

At least 60,000 IBOs were conducted under Raddul Fasaad. The measures taken by the security forces busted terrorist networks across the country, he added.

Over 800 security alerts were issued during the year that managed to thwart terrorism incidents by 70 per cent, the ISPR chief added.

The ISPR chief also spoke about the talks with the Tehreek-e-Taliban Pakistan. He said the dialogue with the banned outfit is suspended and the military operations against them are continuing.

He said that ceasefire with the militant outfit ended on December 9, he said, adding that the initiative was confidence-building measures taken by Pakistan at the request of the Afghanistan government led by the Afghan Taliban.

Major Gen said the Tehreeke-i-Taliban Pakistan (TTP) was brought to the table by the Afghan Taliban as there was a “condition for the interim Afghan government that the TTP should not be operating from the Afghan soil” against Pakistan.

The Afghan Taliban said they would bring them to the table and make them accept what Pakistan wanted, he said, adding, “Obviously, those external conditions were yet to be settled.”

According to the ISPR DG, there were internal differences in the TTP, adding that there were some problems in the negotiations. “Some of the conditions were non-negotiable from our side so there is no ceasefire,” he said, adding that the operations will continue till the eradication of the terror outfit.

Talking about the country's first-ever National Security Policy, that was approved last month, Maj Gen Iftikhar refrained from commenting on the drafting of the implementation framework.

However, he did say that "institutional input" was given for the policy, adding that the next step was the mechanism and implementation framework.

"It will not happen in one day, it will take time. But the good thing is that [the policy] has been approved and national priorities have been highlighted."

Speaking about COVID-19, he said the armed forces of Pakistan are fully engaged in the ongoing efforts against Covid-19. He termed vaccination an effective weapon against the pandemic.

“According to the latest reports, the number of cases is increasing again with the advent of the new variant. The NCOC has issued guidelines in this regard,” he added.

Responding to a query regarding talks of deal with former premier and Pakistan Muslim League-Nawaz (PML-N) supremo supremo Nawaz Sharif, the DG ISPR termed the reports as 'baseless speculation'.

"Who is striking a deal with Nawaz Sharif?" he asked the reporters, also demanding they furnish proof if there is any.

"If someone does talk of a deal, then you must ask them who is offering a deal," Major General Iftikhar said.

The DG ISPR also maintained that there is no trouble afoot when it comes to civil-military relations and urged the media to "keep the establishment out of it".