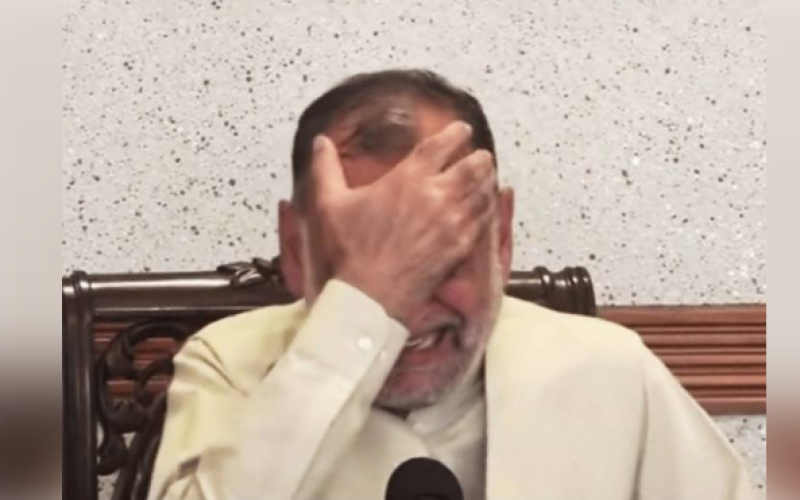 Lahore (Web Desk): Pakistan Tehreek-e-Insaf (PTI) Senator Azam Swati on Saturday claimed that one of his family members received a private video featuring him and his wife from an unknown number.

Addressing the press conference, the PTI leader, who was arrested on October 13 in a case registered against him over a controversial tweet and is now on bail, has claimed that has been subjected to custodial torture.

Azam Swati burst into tears and said that the personal videos were sent to his daughter.

The PTI senator said that that the videos were shot when he was visiting Quetta with his wife.

"When a daughter tells her father that such video belongs to her parents, think what kind of mental stress I had to face," he questioned.

Swati revealed that Senate chairman Sadiq Sanjrani had made arrangements for his accommodation at the judicial lodges of the Supreme Court (SC) in Quetta.

“I was told that no any Supreme Court judge is currently in Quetta and I can stay in the lodges,” he said.

Lashing out at the perpetrators, he said that they have started leaking the family videos after they failed to find any corruption and immoral things against him.

"The sanctity of husband and wife relations has been violated,", Swati said, urging he urged the apex court to ensure justice in the case".

“I cannot commit suicide but I will stay in the country to fight the cruelty,” he said.

This was the second time that Swati shared the account of an ordeal he allegedly went through, initially having described his “custodial torture” on November 1.

The PTI senator was arrested by the Federal Investigation Authority's (FIA) cybercrime unit on October 13 for allegedly making ‘controversial claims’ against state institutions, including the army chief.

On November 1, the PTI senator detailed the “torture” he was allegedly subjected to in the custody of FIA and called on Chief Justice of Pakistan (CJP) Umar Ata Bandial to investigate the incident.

However, the FIA rejected the allegations, saying that the “dignity of the lawmaker was ensured during the entire legal process”.

In a post on Twitter, the former premier wrote, “Pakistan was created on Islamic moral values of human dignity, honour of the family and inviolability of chadar and chardawari.

& now this video where privacy of his wife has been violated. It is both shocking, despicable & utterly condemnable. No human being should have to suffer this. I call on the CJP to take suo moto notice of this.

“I want to apologise on behalf of Pakistan to Mrs Swati, a very private, non public, tahajud guzaar lady for the pain, anguish and sense of humiliation she is having to suffer, ” the PTI chief said in another tweet.

I want to apologise on behalf of Pakistan to Mrs Swati, a very private, non public, tahajut guzaar lady for the pain, anguish and sense of humiliation she is having to suffer.