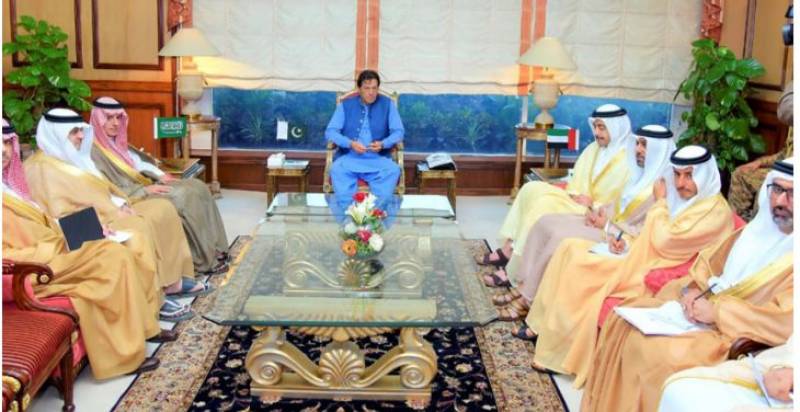 PM Imran expressed concern over the human rights violations in IoK and put emphasis on lifting of curfew, removal of restrictions on movement and communications, and respect for the fundamental rights of the Kashmiri people.

The visiting dignitaries reaffirmed the strategic significance of the relationship of Saudi Arabia and UAE with Pakistan.

They expressed concern over the human rights violations and said that contact will continue on the subject to ensure an end to tensions.

“There was a genuine fear of a false flag operation to divert world’s attention from India’s illegal actions and intensified repression of Kashmiris,” said a PM office release.

The PM added that that Saudi Arabia and UAE have an important role in this regard.

The meeting took place here at the Foreign Office soon after the arrival of the Saudi and Emirati dignitaries here on a day-long visit.

Prior to the delegation-level talks, the three foreign ministers warmly shook and raised hands in front of cameras as a gesture of unity among the three nations.

Addressing a press conference, FM Qureshi said there was no doubt that Saudi Arabia and the UAE were standing by Pakistan. “We are hopeful that [both countries] will not disappoint us.

The ministers of both countries have listened to our stance on the situation,” Qureshi added.