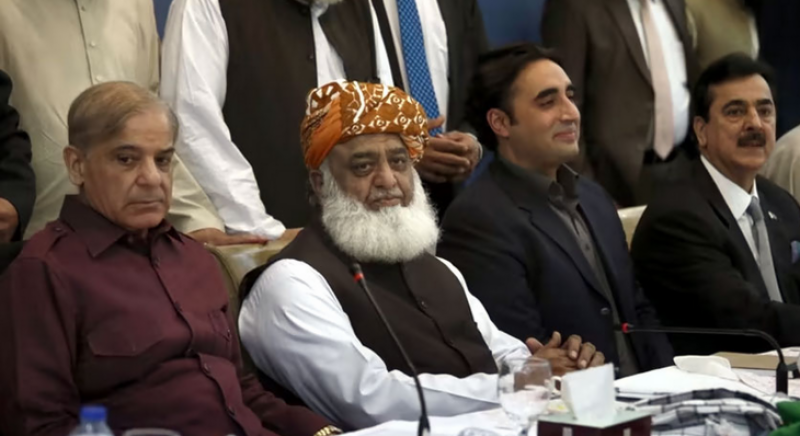 In a joint statement on Monday, the leaders of the coalition parties said that the entire nation is faced with the floods situation while Imran Khan is resorting to hatred, revenge and arrogance.

"The PTI chairman is fighting with national institutions including armed forces and the people and is resorting to slander campaign with the aim to influence economic revival process and turn Pakistan into Sri Lanka," the statement said.

The coalition partners said that Imran Khan wants to pitch the people against the military besides a clash in the rank and file of the institution.

They expressed the resolve to foil this nefarious design and deal with the conspirators according to the law and constitution.

The ruling partners said that Pakistan will be run according to the constitution and it cannot be allowed to be enslaved by the arrogance, fascism and dictatorial attitudes of an individual.

They said under the leadership of Prime Minister Shehbaz Sharif, the armed forces in collaboration with the federal and provincial governments and other institutions are rendering valuable services to help the flood victims in the country.

On the other hand, the army officers and Jawans are also fighting the war against terrorism with courage and bravery, and embracing martyrdom.

"At a time when the entire nation is united on the agenda of ridding the country of terrorism, ensuring economic stability and focusing on relief and rehabilitation of flood victims, a single voice is spreading lies, propaganda and allegations to tear apart the national unity,"

The ruling coalition parties said they have a complete consensus to protect the interests including the revival of the economy.

They affirmed that the constitutional respect of national institutions including the armed forces and their leadership as well as the assistance, relief and rehabilitation of the flood victims will not be allowed to be affected.

"The conspirators will be dealt with as per the constitution and law, and that their sordid designs to weaken the country will be thwarted," the coalition partners stated.

In a tweet, the premier wrote, "Imran Niazi's despicable utterances to malign institutions are touching new levels every day.

PM Shehbaz said Imran Khan was indulging in “direct mud-slinging and poisonous allegations against armed forces and its leadership.”

The prime minister pointed out that the agenda of Imran Niazi was to disrupt Pakistan.

"His nefarious agenda is clearly to disrupt and undermine Pakistan," PM Shehbaz said.

On Sunday, PTI chief Imran Khan in a public rally in Faisalabad, called out the government, saying that it was delaying the elections to appoint an army chief of its own and that if a "patriotic chief of army staff comes in, he will not spare the incumbent rulers."