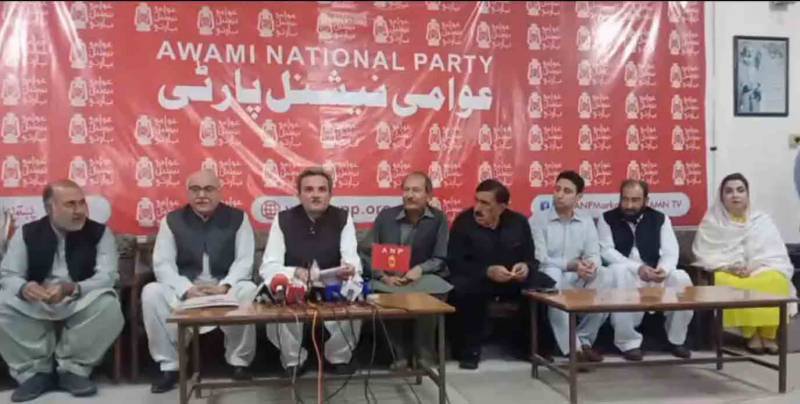 Peshawar (Web Desk): The Awami National Party (ANP) on Tuesday announced to quit the anti-govt Pakistan Democratic Movement (PDM) following the issuance of show-cause notice by the secretary general of the alliance.

Addressing a press conference, ANP senior vice president Ameer Haider Khan Hoti said that all party leaders have quit from all posts of the PDM.

"After receiving the show-cause notice, ANP's political leadership has decided to part ways with the PDM," Hoti stated.

"PDM's alliance has been hijacked by some political parties," Hoti added.

He said that no one, except ANP chief Asfandyar Wali Khan, can send them a show-cause notice.

Hoti said that the PPP had raised objections over the PDM candidate Azam Nazir Tarar.

He added that the PDM, instead of addressing the concerns, issued notices and caused political damage to the ANP.

“We cannot tolerate the personal agenda driven by 2-3 parties”, the ANP leader said.

Ameer Haider Khan Hoti said that attempts were being made to de-track the PDM and in the situation ANP could not support it anymore.

“It was expected from PDM chief Maulana Fazlur Rehman and General-Secretary Shahid Khaqan Abbasi that they would take decisions as the leaders of the alliance, not as the representatives of their parties,” Hoti said.

On Monday, PDM served show-cause notices to Pakistan People’s Party (PPP) and ANP over alleged violation of the consensus decision and principles of the opposition alliance.

According to details, the notices had been sent by Pakistan Muslim League-Nawaz (PML-N) leader and Secretary General PDM Shahid Khaqan Abbasi following the approval by PDM chief Maulana Fazlur Rehman.

As per the notice, PPP had been asked to explain within a week, the appointment of its candidate Yousuf Raza Gilani, as Leader of Opposition in Senate, by defying the consensus decision by other parties of the Opposition alliance.

Meanwhile, the ANP had been directed to clarify why it had supported PPP in this move.

Last week, the PDM decided to part ways with the PPP and ANP, and form a new alliance of five opposition parties having 27 members in the Senate.

However, the PPP backed out of consensus understanding and opted to get the slot of the Opposition leader by roping in some members of Balochistan Awami Party (BAP), which is part of the government.