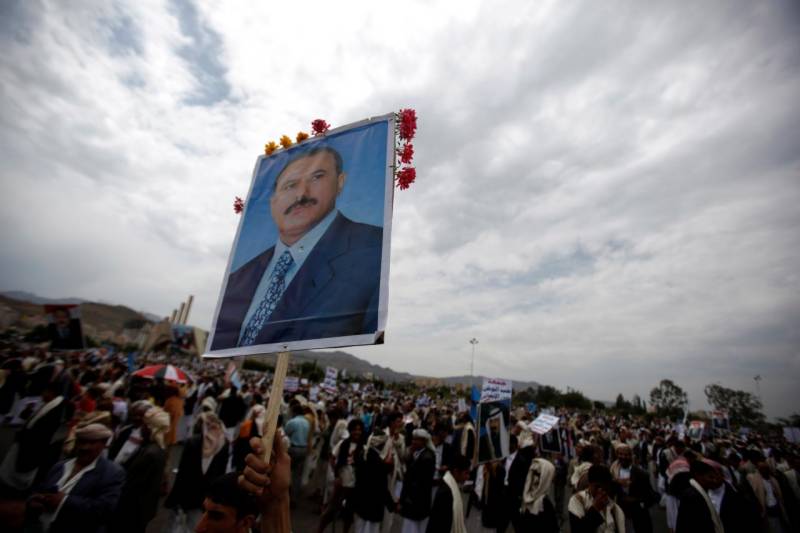 Sanaa (Reuters): The powerful exiled son of Yemen’s slain ex-president Ali Abdullah Saleh vowed on Tuesday to lead a campaign against the Huthi movement that killed his father after he switched sides in the civil war.

The intervention by Ahmed Ali Saleh, a former leader of the elite Republican Guard once seen as a likely successor to his father, gives the anti-Huthi movement in Sanaa a potential figurehead, after a week of fighting that saw the Huthis rout Saleh’s supporters in the capital.

Yemen’s war, pitting the Iran-allied Huthis who control Sanaa against a Saudi-led military alliance backing a government based in the south, has brought what the United Nations calls the world’s worst humanitarian crisis. The world body says millions of people may die in one of the worst famines of modern times, caused by warring parties blocking food supplies.

Saleh had helped the Huthis win control of much of the country’s north including Sanaa, and his decision to switch allegiances and abandon the Huthis in the past week was the most dramatic change on the battlefield in years. But the Huthis swiftly crushed a pro-Saleh uprising in the capital and shot him dead in an attack on his convoy.

Tens of thousands of Huthi supporters staged a rally in the capital on Tuesday to show support for their leader and celebrate the death of Saleh. They chanted slogans against Saudi Arabia and its allies.

Mahmoud Ali al-Huthi, head of the movement’s Revolutionary Committee, denied allegations that the group was executing members of Saleh’s party after their capture: “We have been treating some of Saleh’s sons and we haven’t executed them,” he told the crowd.

Sanaa saw no fresh fighting on Tuesday after five days of combat that the Red Cross said killed more than 230 people. The Saudi-led coalition struck the city with 25 air strikes overnight, but UN and Red Cross aid flights were able to land at the airport, UN humanitarian coordinator in Yemen Jamie McGoldrick said. The death of Saleh deepens the complexity of the multi-sided war.

Much is likely to depend on the future allegiances of his loyalists, who had previously helped the armed Huthi group, which hails from the Zaidi branch of Shia Islam that ruled a thousand-year kingdom in northern Yemen until 1962.

In a statement sent to Reuters by an aide, his son said his father was killed at “the hands of the enemies of God and the country”. Ahmed Ali said he would “confront the enemies of the homeland and humanity, who are trying to obliterate its identity and its gains and to humiliate Yemen and Yemenis”.

Man who tried to sabotage anti-polio drive in Peshawar arrested