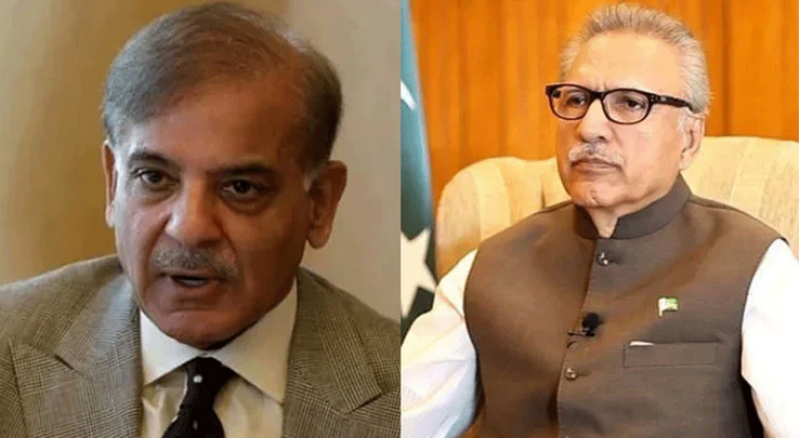 In a series of tweets, Prime Minister Shehbaz Sharif said that India, under Modi-led fascist regime, is trampling religious freedoms and persecuting Muslims.

Terming love for the Holy Prophet Mohammad (PBUH) as supreme, PM Shehbaz said that all Muslims can sacrifice their lives for the love and respect of their Holy Prophet (PBUH).

The premier urged the global community to take note of such derogatory comments and severely reprimand India.

Meanwhile, President Dr Arif Alvi on Sunday also condemned in strongest possible words the hurtful comments of India's BJP leaders about the Holy Prophet (PBUH) and said that these derogatory and controversial remarks had hurt the feelings of all Muslims around the world.

This, he said, was the reflection of growing trend of Islamophobia in India where Muslims lived in millions. The President said that merely suspending and expelling party officials was not enough but BJP must shun and denounce its extremist and fascist Hindutva ideology.

The president said that India under Modi’s hateful Hindutva philosophy was trampling religious freedoms of all its minorities and persecuting them without any impunity.

He further said that "allowing such Islamophobic remarks to continue without punishment constitutes grave danger to the protection of human rights and may lead to further prejudice and marginalization which will create a cycle of violence and hate."

President Arif Alvi called upon the world community, United Nations (UN) and international human rights organizations to take a serious notice of rising Islamophobia and systematic religious persecution in India without impunity and take all steps necessary to put an end to it.

In a tweet, the foreign minister said that these remarks have hurt the sentiments of billions of Muslims around the world.

We strongly condemn the completely repugnant & derogatory remarks by BJP officials about our beloved Prophet Muhammad PBUH. Totally unacceptable; hurting sentiments of billions of Muslims around the world. Time for intl comm to stop the ‘Hindutva’ inspired Islamophobia in India https://t.co/JZmmPLyQwx

In a statement on Twitter, the PTI chief wrote "The attacks on Muslims are being carried out under the auspices of Modi government.”.

Strongly condemn the hateful attack by a BJP spokesperson on our beloved Holy Prophet PBUH. Modi govt has been deliberately following a policy of provocation & hatred towards Muslims in India including inciting vigilante violence against them.

Minister for Information and Broadcasting, Marriyum Aurangzeb has also condemned in strongest terms, the blasphemous statement of BJP leaders about Prophet Muhammad (PBUH).

In a statement on Monday, she said that the statement by BJP leaders is another proof of the extremist mindset of the BJP.

The minister called upon the international community to take notice of this attitude and actions of the Indian government against the global movement for interfaith harmony.

She said every Muslim considers the honor and sanctity of the Holy Prophet Muhammad (PBUH), dearer than his own life and is ready to sacrifice his life for this cause.

Minister for Climate Change, Senator Sherry Rehman has strongly condemned the derogatory and controversial remarks of the BJP officials saying that it has hurt the feelings of all Muslims around the world.

In a statement, she said Indian extremism has become a threat to the world and Modi government is spreading hatred among the people on sensitive religious issues.

The minister said shocking and provocative statements of BJP officials about our beloved Prophet (PBUH) were highly condemnable.

Senator Sherry Rehman urged the international community to take notice of it and severely reprimand India over the continuing persecution of Muslims in the country.