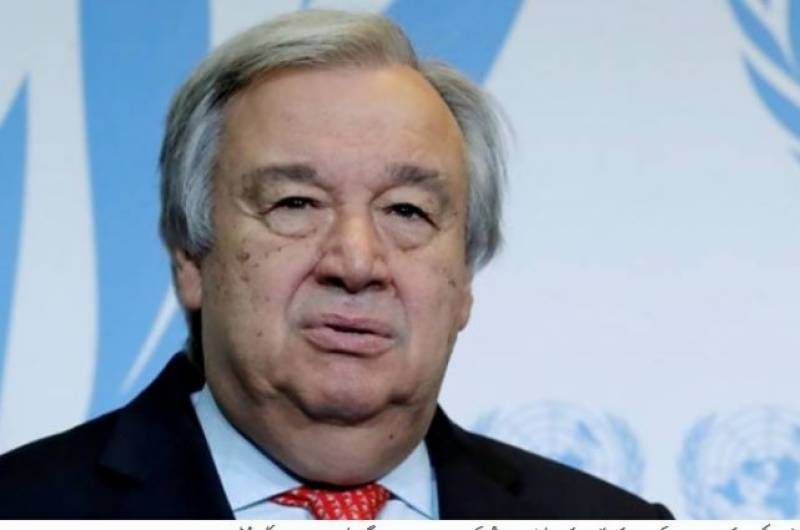 New York (Agencies): United Nations (UN) Secretary-General Antonio Guterres has once again reiterated his call to Pakistan and India to “de-escalate the tensions” between the two countries as the situation in the region continues to pose threat to peace and security.

“We are fully aware of the situation,” Guterres’s spokesman Stephane Dujarric said in reply to a question at the regular noon briefing at UN Headquarters in New York.

The spokesman further said the UN chief was in touch with both sides at various levels to “express his concern and the need to do as much as anyone can to de-escalate the tensions.”

However, he added the secretary-general had not yet spoken to the prime ministers of the two countries — Imran Khan and Narendra Modi — “as far as I am aware.”

Earlier, UN Secretary General had urged India and Pakistan to keep up the “positive momentum” generated by the release of captive Indian fighter pilot by Pakistani authorities, and to hold talks to de-escalate the tension.

According to a statement issued by his deputy spokesperson Farhan Aziz Haq, UN Secretary General Antonio Guterres urged the two neighbouring nations to hold talks to de-escalate the tensions between them, saying his "good offices remain available should both sides agree"

"We welcome the news of the Pakistani authorities releasing the captive Indian pilot," he said, referring to the release of Indian Air Force Wing Commander Abhinandan, whose warplane was shot down by Pakistani jets on last Wednesday.

The spokesman added that the Secretary-General calls on both parties to sustain this positive momentum and engage in further constructive dialogue.