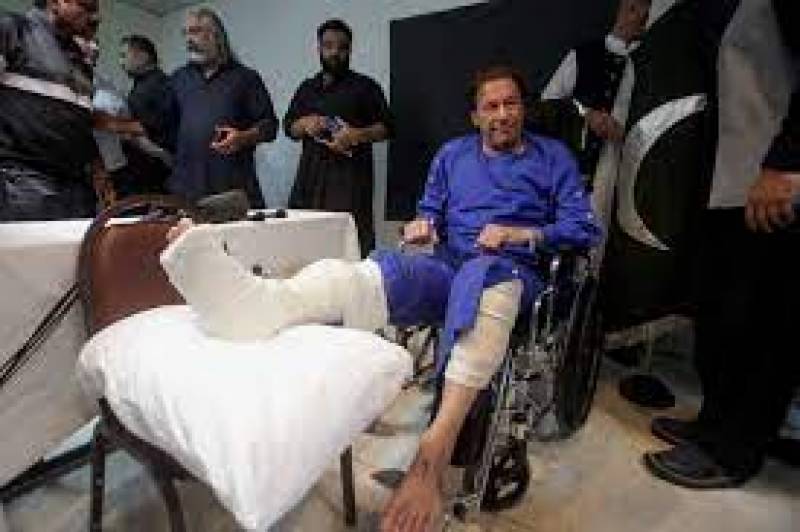 Lahore (Web Desk): PTI Chairman Imran Khan on Sunday announced that his party will resume its long march toward Islamabad from Wazirabad on Tuesday.

“We will start the march from Tuesday. I will address every day,” said Imran Khan while addressing a press conference from the hospital. “I will lead the march from Rawalpindi when it arrives in 10-14 days,” the former premier added.

On Friday, Imran Khan announced that he will resume his Azadi march again once he recovers from injuries.

In his first address since the assassination attempt, the PTI chief said that he had already learned that there was a plan in place to kill me somewhere between Wazirabad and Gujrat.

Imran Khan said that that the “government and its handlers” had planned to get him murdered in the same way former Punjab governor Salman Taseer was killed.

"Firstly, they accused me of blasphemy. They made tapes and released them and Pakistan Muslim League-Nawaz (PML-N) projected it, I knew who was doing it," he said.

Imran said that he had already narrated this plan to the public during a September 24 rally.

“This happened exactly according to the script,” the former premier prime minister said.

Describing the gun attack on him during the long march, Imran Khan said that he was on the container when a “burst of bullets” was directed at him, causing him to get shot in the leg and fall down.

Imran Khan and several party members were injured while a party activist was killed in firing incident at former premier's container during his “Azadi March” in Wazirabad, on Thursday.