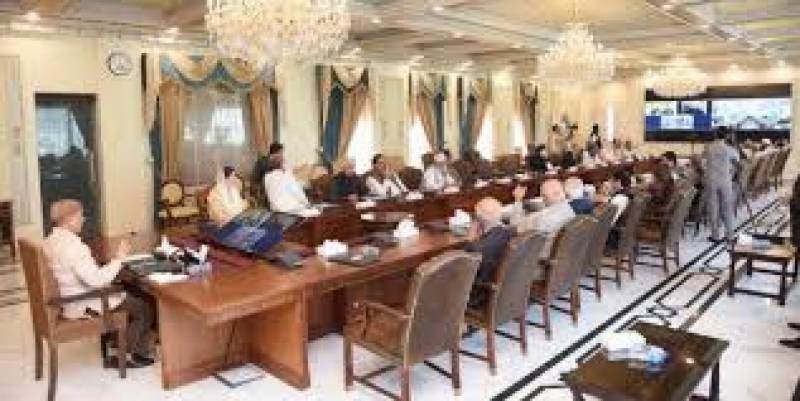 Islamabad (Web Desk): A meeting of all the political leadership of the federal coalition government ,chaired by Prime Minister Shehbaz Sharif, was held in Islamabad on Wednesday.

As per the details, the coalition parties of the government resolved that no one would be allowed to mount an assault on Islamabad while trampling the basic core of the constitution and relevant laws.

In an apparent reference to Pakistan Tehreek-e-Insaf (PTI) chief Imran Khan's call for converging his supporters in Islamabad, the meeting also cautioned the provincial governments of Punjab and Khyber Pakhtunkhwa (KP) to desist from becoming the second fiddle to PTI leader's in the creation of chaos and anarchy in the country.

Those who would cross the red line, would be liable to be dealt in with the relevant laws, it was declared.

The meeting strongly condemned the attacks on the national institutions and warned that anyone who would try to cross the red line, would face the resistance of 220 million people of the country and the strength of law.

"The one who tried to sidetrack the institutions is a renegade, conspirator and mischievous," the meeting agreed and opined that the person(s) who had been instigating the institutions to breach the constitution was hell-bent upon pushing Pakistan into serious crises.

During the meeting, the overall political, economic, internal and external fronts situation were discussed in detail. The meeting also approved the future strategy.

The meeting offered Fateha for the departed souls and expressed condolences with the bereaved families who lost their near and dear ones in the historic floods that devastated parts of the country after June 14.

PM Shehbaz expressed his satisfaction over the constitution of the National Flood Response and Coordination Center as a prompt step and the subsequent rescue, relief and rehabilitation efforts of the flood-affected people.

The meeting appreciated the leading role, passion, focus and the untiring efforts of the prime minister in this regard.

They also lauded the role of federal, provincial governments and institutions, especially army, navy and air force for their role in the natural catastrophe.

The participants also acknowledged the donations and humanitarian assistance provided by the philanthropists during the period.

Federal Minister for Economic Affairs senator Ishaq Dar apprised the meeting of the talks with the International Monetary Fund (IMF) and other financial institutions and the steps taken for the revival of the economy.

He said that during the previous government’s four years of economic disastrous policies, the national economy did not witness any positive indicator.

The debt of Rs20,000 billion taken during the previous government’s tenure had pushed the country on the verge of being declared as default, he added.

The minister said that the rupee had gained against US dollar during the last Monday and expressed the hope that a US dollar would trade below Rs200.

Sharing further details, he said during their previous rule, inflation was recorded at 3 percent whereas the growth rate was hovering around 6.3%.

Ishaq Dar stressed upon pursuance of a robust and continuity of economic discipline for the achievement of economic stability.

The meeting expressed its confidence in the measures of the finance minister and appreciated his performance.

They also decided to cut down the prices of power and stressed upon all the possible and immediate measures to reduce the burden on the masses which were put by the previous regime.

The meeting also expressed its deep concern over the audio leaks of the former premier Khan over the diplomatic cipher and strongly condemned the grave ploy to play with the national solidarity and the national interests.

In this connection, the meeting also fully endorsed and supported the cabinet’s decisions and the government’s steps of September 30.

They called for immediate completion of a probe by the FIA into the serious crimes committed against the state and the national interests and proceed against the responsible in accordance with the law.