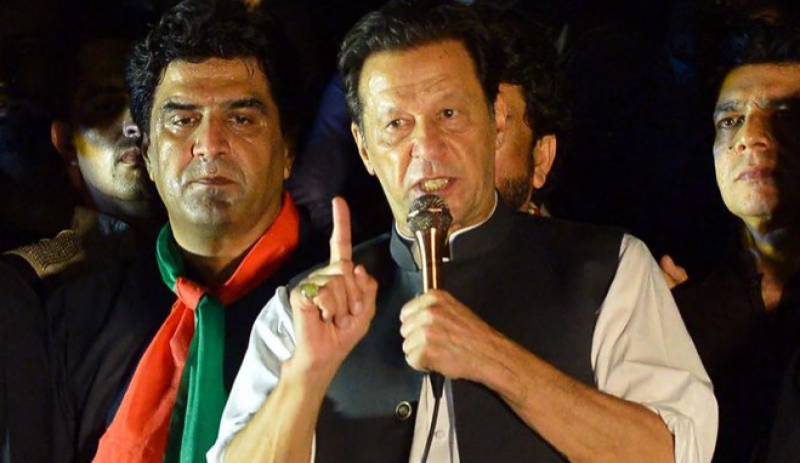 Islamabad (Web Desk): Pakistan Tehreek-e-Insaf (PTI) Chairman Imran Khan on Tuesday said that he will reply to the Pakistan Democratic Movement's (PDM) propaganda to malign him.

In his post on Twitter, the former premier said that he was following the "intense propaganda" against him that had been launched by the "PDM cabal of crooks".

Khan said that this stems from their being petrified of PTI's soaring popularity.

Am following intense propaganda launched by PDM cabal of crooks against me.This stems from their being petrified of PTI's soaring popularity. Today in Peshawar jalsa I will give proper reply to all those who have deliberately been distorting my words to malign me.Enough is enough

On Sunday, PTI chief Imran Khan in a public rally in Faisalabad, called out the government, saying that it was delaying the elections to appoint an army chief of its own and that if a

"patriotic chief of army staff comes in, he will not spare the incumbent rulers."

Responding Khan's tweet, Pakistan Muslim League Nawaz (PML-N) said the “enemy of the state has come out all guns blazing against the state institutions”.

It added in a tweet that from the ECP, to the judiciary, to the police and armed forces, Khan is

“having a go at anyone who’s unwilling to bow down to his fascism”.

It then followed it up by saying it’s “#ImranVsPakistan now and we stand with Pakistan”.

The enemy of the state has come out all guns blazing against the state institutions. From ECP, to judiciary, to police and armed forces, he is having a go at anyone who's unwilling to bow down to his fascism.

On Monday, government's coalition parties and military's spokesperson also expressed concerns over the statement made by the PTI chief last week in Faisalabad public rally.

In a statement, the Inter-Services Public Relations (ISPR) said that the Pakistani Army was displeased over the PTI chairman's recent statement against the military and said it was "aghast" over it.

"Regrettably, an attempt has been made to discredit and undermine senior leadership of Pakistan Army at a time when the institution is laying lives for the security and safety of the people of Pakistan every day,". the military's media wing said.

The ISPR said that the senior politicians trying to stir controversies on appointment of COAS of Pakistan Army, the procedure for which is well defined in the constitution, is most unfortunate and disappointing.

The statement added that Senior leadership of Army has decades long impeccable meritorious service to prove its patriotic and professional credentials beyond any doubt.

The military's media wing said that Politicising the senior leadership of Pakistan Army and scandalizing the process of selection of COAS is neither in the interest of the state of Pakistan nor of the institution.

"Pakistan Army reiterates its commitment to uphold the constitution of the Islamic Republic of Pakistan," the ISPR said.

In a joint statement on Monday, the leaders of the coalition parties said that the entire nation is faced with the floods situation while Imran Khan is resorting to hatred, revenge and arrogance.

The entire nation is battling floods, while the PTI chairman is consumed by a thirst for revenge and his pride, the statement said, noting that despite the cataclysmic floods, Khan is targetting the armed forces.

The ruling partners said that the serious allegations being levelled against the military are for three reasons: to disturb the country's economy, to move Pakistan's economy to a path that it becomes like that of Sri Lanka, and foster enmity between the nation and the armed forces.