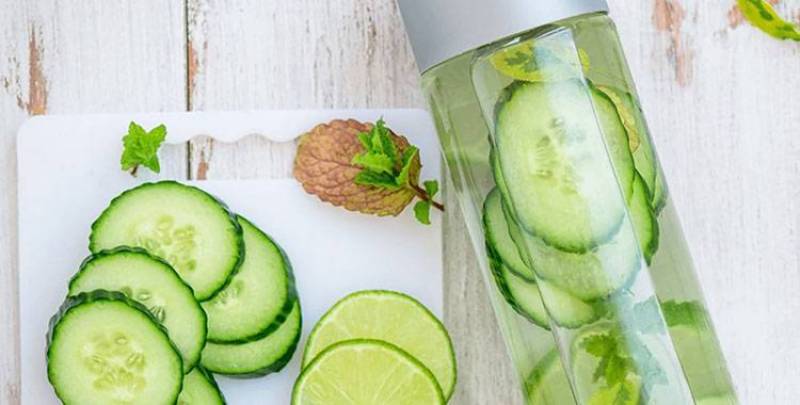 Lahore (Web Desk): Cucumbers are not only good for health but also widely used in traditional diets as well as spas across the world for a reason. It is commonly known that Cucumbers are high in water and low in calories, fat, cholesterol, and sodium.

A recent research paper revealed that Cucumbers have the following benefits: potential antidiabetic, antioxidant activity, cleansing action of toxins and waste, soothing effect against skin irritation, and prevention of constipation.

A few of the many benefits of cucumber water include skin care, weight loss, chronic disease, cardiovascular health, and bone density, among others.

Cucumbers are 95.2 percent water, which means that a 5-ounce serving contains 4.8 ounces or 150 ml water. That’s already about 26 percent of your daily water intake through food.

Cucumbers contain potassium (152mg per cup), which can help lower blood pressure. A review of the best studies conducted on potassium intake showed that a higher intake “is associated with lower rates of stroke and might also reduce the risk of total cardiovascular disease.”

As less than 2 percent of U.S. adults consume the recommended 4,700 mg potassium per day, eating cucumbers is an easy way to start increasing your potassium consumption.

3. Protect your brain from neurological diseases

An anti-inflammatory substance called fisetin is present in cucumbers, as well as strawberries and grapes.

It has recently been suggested that fisetin plays an important role in brain health: It would have “the ability to reduce the impact of age-related neurological diseases on brain function,” and it would also help maintain cognitive function in people with Alzheimer’s disease.

4. Protect your skin against the effects of aging

There is a reason why cucumbers are used in skin care: They have been shown to be effective as a potential anti-wrinkle agent in cosmetic products, protecting our skin form the effects of aging.

5. Fight inflammation in the body and reduce the risk of cancer

Cucumbers can help lower the inflammatory response in the body. They contain polyphenols called lignans, which can potentially reduce the risk of certain cancers and cardiovascular diseases.

They also contain plant nutrients called cucurbitacins, which have anti-cancer properties: “Scientists have already determined that several different signaling pathways required for cancer cell development and survival can be blocked by activity of cucurbitacins.”

Flavonoids, which are anti-inflammatory substances, and tannins in cucumbers have both been shown to limit the release of free radicals in the body and to reduce pain.

As explained in the Journal of Young Pharmacists, “traditionally, this plant is used for headaches; the seeds are cooling and diuretic, the fruit juice is used as a nutritive and as a demulcent in anti-acne lotions.”

Bad breath is usually caused by bacteria in the mouth. Fiber and water-rich vegetables like cucumbers can boost your mouth’s saliva production, which in turn helps wash away the bacteria that cause the odor in the mouth.

Cucumber are a good source of vitamin K: One cup contains 22 percent of the recommended daily intake of vitamin K. This vitamin is essential for bone health, as low vitamin K intakes have been associated with a higher risk for bone fracture. Vitamin K is also important for improving calcium absorption in the bones.

Cucumbers are rich in water, and their skin contains insoluble fiber. Both water and fiber help food to move through the digestive tract quicker and more easily, helping prevent constipation.

Cucumbers are very low in calories (16 calories per cup) and they also contain fiber in the skin. And foods that contain fiber can help maintain a healthy weight.

Must know amazing benefits of Pistachios