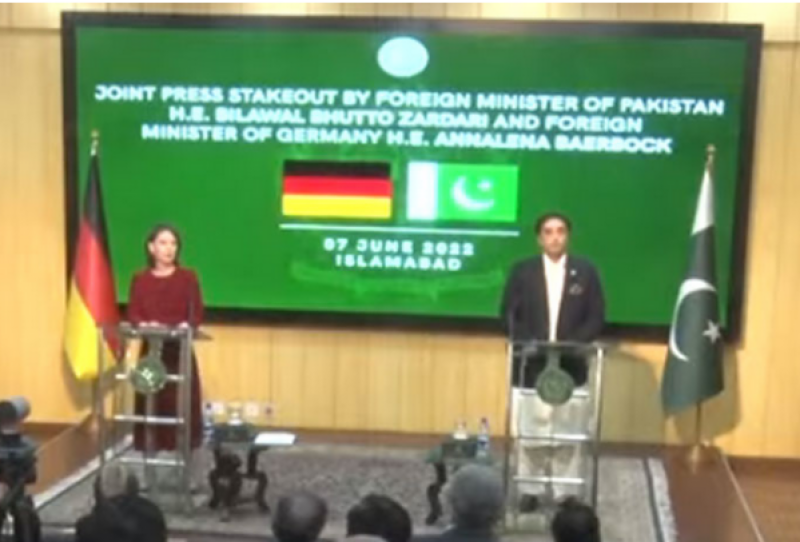 Islamabad (Web Desk): Pakistan and Germany have expressed the resolve to further deepen their bilateral ties in diverse fields.

Addressing a joint press conference along with his German counterpart Annalena Baerbock in Islamabad on Tuesday, Foreign Minister Bilawal Bhutto Zardari said that Pakistan has close cooperation with Germany in a number of areas and we desire to expand it further up to other areas of mutual benefits of the two countries.

He said Pakistan looks forward to continuing to work with Germany for further deepening bilateral ties.

FM Bilawal said Germany is the largest trading partner of Pakistan within the European Union (EU) and also the 5th largest export destination for Pakistan internationally.

He said last year, Pakistan exports to Germany stood at $2.5 billion, while imports from Germany were $1.3 billion.

The foreign minister said Germany is the 7th largest Foreign Direct Investor in Pakistan as 35 German companies are investing in the Pakistan.

Turning to Afghanistan, FM Bilawal said we support a peaceful and prosperous Afghanistan contributing to stability and regional connectivity.

He said the international community must be actively engaged in preventing humanitarian crisis in Afghanistan.

On Ukraine issue, FM Bilawal said that Pakistan remains concerned about the well-being of the Ukrainian people, reports of civilian casualties, massive outflow of refuges and internally displacement of people.

"We have expressed solidarity with the people of Ukraine and sent humanitarian assistance to that country," Bilawal said, adding that Pakistan emphasizes the indispensability for the immediate cession of hostilities and constructive engagement regarding Ukraine.

The foreign minister said that Pakistan firmly hopes that the solution should be found through dialogue and diplomacy at the earliest.

The foreign minister said we discussed the continuing human rights violations in Indian illegally occupied Jammu and Kashmir (IIOJK), the rising tide of Islamophobia across India and risks posed to the regional peace and stability.

"Sustainable peace in South Asia remains contingent upon the peaceful resolution to the Jammu and Kashmir dispute in accordance with the relevant United Nations (UN) resolutions and the wishes of Kashmiri people," FM Bilawal said.

The foreign minister said Pakistan always emphasized upon and supported a peaceful and stable Afghanistan contributing to the regional progress and development and connectivity.

He stressed upon the international community to focus on the humanitarian assistance to the Afghan people who had been facing a financial crises. A UN report had indicated that about 97 per cent of Afghan population had been pushed below the poverty line and faced immediate danger of hunger and starvation.

FM Bilawal also stressed that the Afghan government must come up to the expectation of the international community with regard to upholding of the human and women’s rights and take effective steps against terrorism.

He urged the international community to actively engage with the Afghan government to avoid humanitarian crises in Afghanistan, adding releasing of its foreign assets would help its sagging economy.

The foreign minister said Pakistan had been a victim of terrorism from the groups operating in Afghanistan, adding they were concerned about the consequences of the humanitarian crises unfolding on their borders.

FM Bilawal called upon the international community to help avoid a total economic collapse in Afghanistan.

The foreign minister said Pakistan faced economic constraints in helping the Afghan refugees, still it was playing a very responsible role on the world stage.

About Pakistan’s diplomatic priorities, he said they had focused on strengthening of economic relations by resetting of ties with different countries, adding Pakistan was keen that its GSP plus status should be extended so that its businesses and economy could take benefits.

In her remarks, German Foreign minister Annalena Baerbock said that during her meeting with FM Bilawal, they had discussed at length the issue of Afghanistan where the situation had forced millions to leave the country.

Lauding Pakistan’s role for peace and stability in Afghanistan, she said Pakistan had shown ‘a big heart’ to provide shelter and support to Afghan refugees.

The German foreign minister said it was an enormous task and reiterated her government’s solidarity and support to Pakistan.

"Germany remained committed to continuing its support to the Afghan refugees in Pakistan," FM Baerbock said, urging the international partners to play their part in supporting efforts for education and health sectors.

She also expressed Germany's concerns over Taliban treatment of women and people and said that Afghan’s economy had come to a grinding halt.

Annalena Baerbock said that Taliban government had been heading in the wrong direction still she reiterated that they would not abandon the people of Afghanistan and would continue to provide support.

About ties with Pakistan, she said that both countries had been the closest and reliable partner, adding both countries achieved when they worked together by further strengthening the bilateral relations.

The German foreign minister said Germany and Pakistan had prioritize their efforts to combat climate crises as the time for the world community was running out, requiring immediate global action.

She said both the countries excellent ties and there existed immense opportunities for trade and investment and energy sectors.

To a question regarding Kashmir, she said they supported resolution of the Kashmir issue in accordance with the UN resolutions.

She said they believed that a constructive approach and confidence building measures between Pakistan and India were key to improvement of the ties and solution of the issue.

The German foreign minister thanked Bilawal Zardari for extending warm welcome at her arrival in Pakistan.