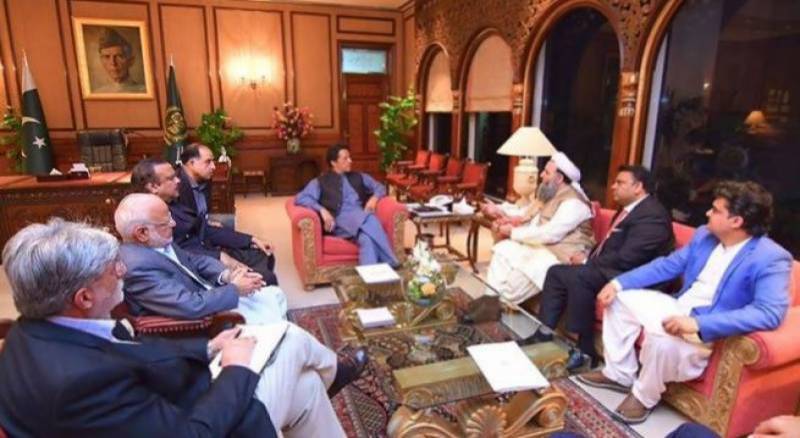 The directives come a day after the interior ministry briefed the premier on the demonstrations led by the religious group – against the acquittal of Asia Bibi – and the progress on the crackdown against miscreants.

Earlier, Federal Minister for Information and Broadcasting Fawad Hussain Chaudhry had announced that the government will compensate for the loss of those who lost their valuables during nationwide protest.

Talking to media, Fawad highlighted that the federal government has sought details of the losses incurred during the protests from the provinces.

“Everyone knows the real motives of the forces who harness religion for politics,” the minister said.

Fawad lauded the opposition parties for standing by the government during the protests staged by Tehreek-e-Labbaik Pakistan against the acquittal of Asia Bibi.

Meanwhile, the government started arresting those involved in rioting during the protests.

According to sources, videos circulating on social media of the protests will also be scanned, adding that assistance will be sought from the Ministry of Defence to identify the rioters.

The interior ministry had also asked all the provincial governments to convey WhatsApp numbers to general public through electronic and print media so that public could send information/ videos that might be referred to relevant departments for necessary action.

She said the protesters had injured 63 police officers in different areas of the province who were shifted to nearby hospitals for treatment. Of them, 58 policemen were discharged but five others who had sustained severe injuries were still getting treatment.

The Punjab police spokesperson said about 800 people were arrested for violating section 16 of the Maintenance of Public Order Ordinance 1960 and 300 others under the FIRs registered for injuring policemen, damaging public and private properties and vehicles in different areas of the province.

She said 300 suspects were identified through different footage available to the police. She said the number of the FIRs and the arrested would increase with the passage of time as the police were taking across-the-board action against the miscreants.

Similarly, the police in Karachi detained two men on charges of inciting violence and causing harm to public property while cases were also registered against 12 more.

In Nawabshah, two TLP leaders and dozens of protesters were arrested for violence and hate speech.

After the Supreme Court’s Oct 31 judgement that acquitted Asia Bibi, a Christian woman, in a blasphemy case, the Tehreek-e-Labbaik Pakistan (TLP) of Khadim Hussain Rizvi launched a countrywide protest, bringing several cities to a standstill for nearly three days.