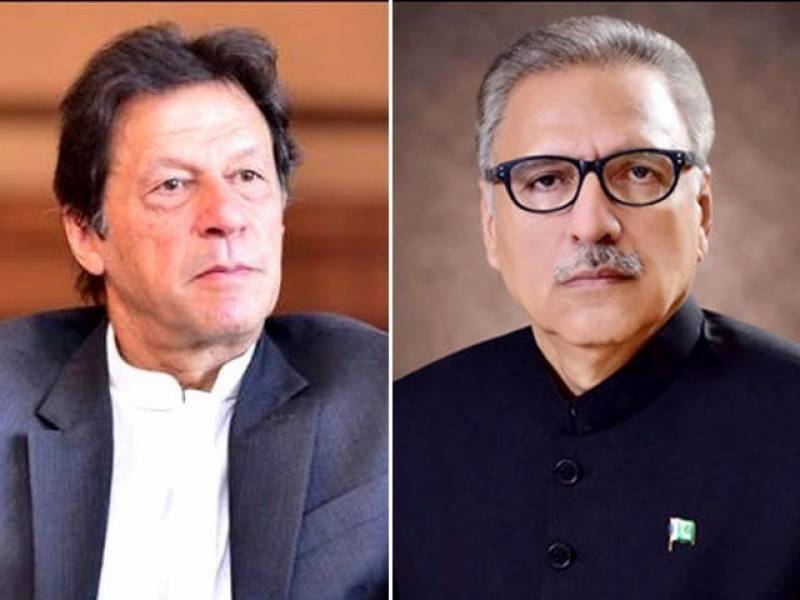 Islamabad (Web Desk): Pakistan Tehreek-e-Insaf (PTI) Chairman Imran Khan wrote a letter to President Arif Alvi urging him to stop the abuse of power as well as the violation of laws and the Constitution.

The former premier said that the entire nation has been supporting his call for "Haqeeqi Azadi" ever since the PTI government was toppled.

He urged the president to arrange an investigation to determine who is responsible and to hold the culprits accountable.

Imran Khan said that the plot was operationalised earlier this week during our long march but Allah saved me and the assassination attempt failed.

In his letter, Imran raised three separate points regarding the Prime Minister Office leak, the cypher controversy and the role of the Inter-Services Public Relations (ISPR).

The PTI chief claimed that Official Secrets Act was breached when a “confidential conversation between myself as prime minister, the Chief of Army Staff and the director general of the Inter-Services Intelligence (ISI), on a supposedly secure line, was ‘leaked’ to the media”.

He claimed that this raised the “very serious question as to who or what organisation was involved in doing a clearly illegal wiretap of the PM's secure phone line”, adding that the incident was a breach of national security at the highest level.

Imran Khan, in his second point, stated that the issue of the cipher was “sent by our ambassador to the US in which the US official conveyed a direct threat of regime change to our envoy who reported the same in quotes as was conveyed to him”.

The PTI chief furthered that the National Security Council (NSC) meeting held on the issue during his reign as the premier “clearly decided this was an unacceptable intrusion into our internal matters and the NSC decided on a demarche to be issued by Ministry of Foreign Affairs (MoFA) to the US envoy in Islamabad”.

Imran further stated that the NSC decision was “reaffirmed by the NSC meeting held under the Shehbaz Sharif government”.

“In view of this, a joint press conference held on 27 October 2022 by the DG ISI and the DG ISPR that had the former contradicting the decision made by the NSC under two governments and stating that the message of the US government conveyed by our envoy in Washington DC in the Cipher was not an unacceptable intrusion into our internal affairs but simply a case of 'misconduct'”.

The former premier questioned how two military officials could “publicly contradict a decision of the NSC” and pointed to the “serious issue of these military bureaucrats deliberately trying to create a false narrative”.

"How the head of Pakistan's premier intelligence agency can do a public press conference,"and “how can two military bureaucrats do a highly political press conference targeting the leader of the largest and perhaps the only federal political party in Pakistan today," Khan wrote.

Imran Khan further said that "the parameters of a military information organisation such as the ISPR also need to be clearly defined and limited to information relating to defence and military issues."

He called on President Alvi "as Supreme Commander of the Armed Forces" to initiate the "drawing up of these clear operational lines for the ISPR".

The former prime minister said that he and the president led Pakistan and that Alvi "must protect its democracy and its Constitution."

"No person or state institution can be above the law of the land," he said.

Imran Khan stated that we have been seeing a massive abuse of citizens at the hands of rogue elements within state organisations, including custodial torture and abductions all carried out with impunity.

"You hold the highest Office of State and I am requesting you to act now to stop the abuse of power and violations of our laws and of the Constitution, which ensures the fundamental rights of every citizen," the PTI chief concluded.

On the other hand, the SC on Monday directed the Inspector General (IG) Punjab to register the first information Report (FIR) of the attack on Imran Khan in Wazirabad within 24 hours.

In his remarks Chief Justice of Pakistan (CJP) Umar Ata Bandial said that the apex court would take suo motu notice if the FIR was not registered.

On Novermner 3, Imran Khan and several party members were injured while a party activist was killed in firing incident at former premier's container during his “Azadi March” in Wazirabad.