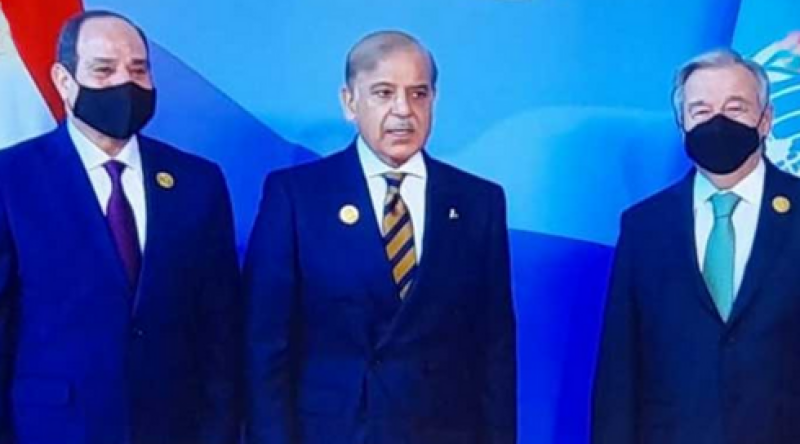 During a meeting with United Arab Emirates' (UAE) President Mohammed bin Zayed Al Nahyan on the sidelines of the COP 27 summit, PM Shehbaz thanked the people and leadership of UAE for helping flood affected people of Pakistan.

The two leaders agreed to work together on issues related to common interests.

Earlier, PM Shehbaz held a meeting with Secretary General of Arab League Ahmed Aboul Gheit on the sidelines of the summit.

They discussed issues of bilateral and mutual interest and agreed on strong cooperation to prevent the devastating effects of climate change.

In his meeting with the European Union Commissioner Ursula von der Leyen, PM Shehbaz appreciated the spirit of EU nations for their support extended to the flood-hit population of Pakistan.

The premier stressed the significance of achieving shared goals that the EU and Pakistan have worked on together, particularly the cooperation extended by EU nations toward the removal of Pakistan's name from the Financial Action Task Force's grey list.

Appreciating EU's support to the flood victims in Pakistan, PM Shehbaz said that the devastating effects of climate change warrant unity of all countries across the world.

PM Shehbaz thanked the international community for helping Pakistan's flood victims and discussed bilateral, regional and global issues with them.

The premier urged the international community to come together to create a common charter for the survival of the planet.

The prime minister termed the commitment of COP 27 as a good omen to combat the effects of climate change.

The government of Egypt is hosting the 27th session of the Conference of the Parties of the UNFCCC (COP 27), with a view to effectively tackling the global challenge of climate change.

COP-27 is taking place at a time when millions of people in Pakistan and millions more in other parts of the world, are facing severe adverse impacts of climate change.