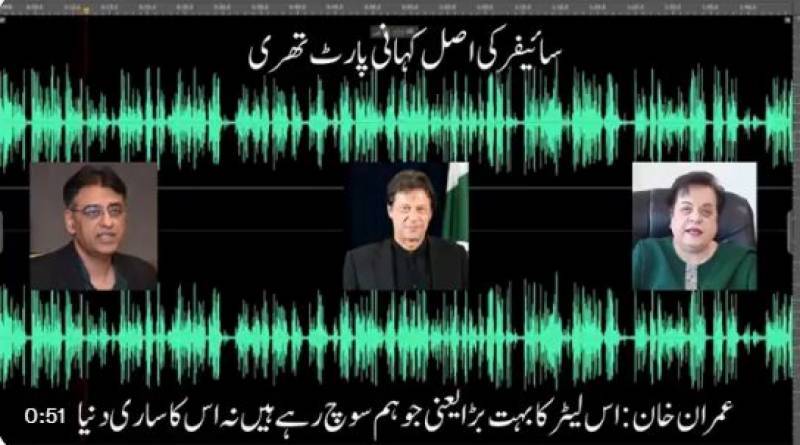 The latest in a series of recordings purportedly featuring the PTI chief talking about the cipher with the PTI leaders.

In the audio, the PTI chief and others are purportedly discussing the cipher and allegedly strategising on how to “play it up in the public”.

Imran Khan replies, "This letter, which we are thinking about, has had an impact across the world."

At this point, Shireen Mazari says: "The Chinese have issued an official statement [...] that they condemn America's interference in our internal affairs."

Imran Khan: "The strategy is that the public is with us and now we have to channelise this public pressure and ensure that the pressure reaches such a height that anyone who goes to the assembly to vote, they are branded for life. But the brand that you'll assign would be: Mir Jafar and Mir Sadiq. You have to spoonfeed people as their minds are already fertile ground and you have to feed them this [narrative]."

The conversation apparently refers to the no-confidence vote, which was tabled by the joint opposition in April to remove Imran Khan from office with the help of PTI dissident lawmakers.

Earlier in the day, an alleged audio of Imran Khan surfaced purportedly featuring him talking about 'horse trading' in the parliament.

The 0.45-second audio starts with Imran purportedly stating “don’t think everything is over", a possible reference to the vote of no confidence in March this year.

"From this point onwards, the next 48 hours is a long long time. Plenty of things are happening and I am also making some moves which we can't disclose to the public," says the voice attributed to the PTI chief.

"I am buying five [MNAs], I have five [MNAs]," the voice allegedly to be of Imran's states.

"Those five are important. Tell him, if he can secure five more, we will have a total of ten. The game will be in our hands.”

Towards the end of the audio, Imran can be heard saying that the nation is alarmed at the moment and wants “us” to win in any way. "Nobody should worry and think if this is right or wrong, whatever tactic it is.

Breaking even a single lawmaker will make a big difference,” the voice believed to be PTI chief's adds.