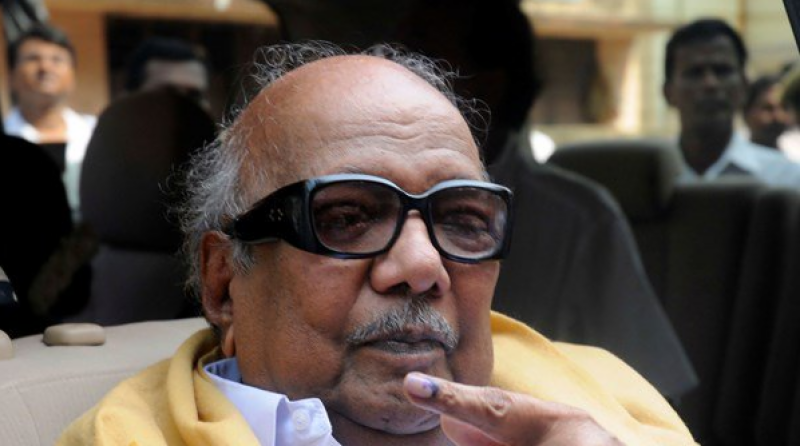 New Delhi (Agencies): Veteran Tamil Nadu politician M. Karunanidhi died in a Chennai hospital on Tuesday at the age of 94.

The leader of the Dravida Munnetra Kazhagam (DMK), who was popularly known as Kalaignar, or poet and artist, helped shape Tamil politics and was a fixture in state politics for more than half a century.

He was a five-time chief minister and elected 13 times to the state assembly between 1957 and 2016.

“With deep anguish, we announce the demise of our beloved Kalaignar... Despite the best possible efforts by our team of doctors and nurses to resuscitate him, he failed to respond,” Kauvery Hospital said in a press release.

“We profoundly mourn the loss of one of the tallest leaders of India and we share the grief of family members and fellow Tamilians worldwide,” it added.

Mr Karunanidhi was admitted to Kauvery Hospital on July 28 after suffering a drop in his blood pressure and a urinary tract infection.

Hundreds of supporters gathered outside the hospital, and there were public scenes of mourning after his death was announced.

Women could be seen weeping while others held up lit candles, chanting “Kalaignar, Kalaignar”.

Tributes have poured in from around India, a clear indication of the stature of the Tamil leader on the federal scene.

Mr Karunanidhi managed to keep Tamil Nadu in the national spotlight by entering into alliances with the current ruling Bharatiya Janata Party in 1990 and then the Congress in 2004.

Prime Minister Narendra Modi, who is expected to attend the funeral, tweeted: “Deeply saddened by the passing away of Kalaignar Karunanidhi. He was one of the (most senior) leaders of India.

“We have lost a deep-rooted mass leader, prolific thinker, accomplished writer and a stalwart whose life was devoted to the welfare of the poor and the marginalised.”

Mr Karunanidhi was born in 1924. His father was a farmer in the village of Thirukuvalai in Tiruvarur district of Tamil Nadu.

A high school dropout, Mr Karunanidhi got involved in social and political work at an early age.

By his 20s, he was making his way into politics, growing close to C.N. Annadurai, the founder of the DMK.

Mr Karunanidhi was among the proponents of the Dravidian movement, which defines Tamil Nadu politics and espouses rationalism, atheism and challenged the dominance of the upper caste Brahmins.

When Mr Annadurai died in 1969, Mr Karunanidhi, then in his 40s, took over leadership of the DMK.

He introduced many social welfare measures, particularly for the poor, and played a huge role in converting Tamil Nadu into one of India’s more prosperous states.

He was also a Tamil scholar who propagated the Tamil language all over the world.

Mr Karunanidhi was a successful film screenwriter, penning multiple hit movies, before moving to politics. He was known popularly as Kalaignar largely because of his screenwriting and other scholarly works.

Known as a charismatic leader and fiery orator, Mr Karunanidhi led his party in the elections in Tamil Nadu in 2016 when he was 91.

The DMK lost the elections to Ms J. Jayalalithaa of the All India Anna Dravida Munnetra Kazhagam, but Mr Karunanidhi still won his seat in his constituency of Tiruvarur.

He and Ms Jayalalithaa, who died in 2016, alternated as chief ministers over the past three decades in the state.

Said Dr N. Bhaskara Rao of the Centre for Media Studies: “He was a grassroots politician who managed to connect with the masses and that is the secret behind his success.”

Mr Karunanidhi is survived by his two wives and six children.