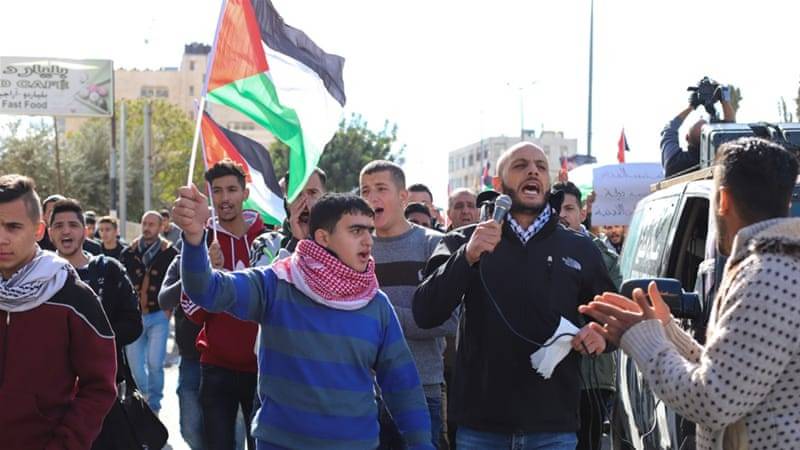 Bethlehem, occupied West Bank (Web Desk): Palestinians marched through Bethlehem in a "day of rage" protest against Donald Trump's recognition of Jerusalem as Israel's capital, as anger over the controversial decision continues to spread across the occupied Palestinian territories.

Israeli military forces shot tear gas and rubber bullets at Palestinian protesters in Bethlehem on Thursday, and at least seven youths were injured in the clashes, including one small child.

Men, women and children participated in the march, which was among several held in the West Bank, Gaza Strip and East Jerusalem, as well as in major cities across the region, throughout the day.

"I am seeing people at this protest that never come out to these kinds of demonstration," Rabee Alsos, 32, told Al Jazeera in Bethlehem.

"Jerusalem and al-Aqsa [Mosque] means a lot to everyone here, even the children. This [US] decision is a big mistake."

Trump announced on Wednesday that he was recognising Jerusalem as Israel's capital and that he would begin the process of moving the US embassy from Tel Aviv to the city, to the disbelief of Palestinians and world leaders.

No country currently has its embassy in Jerusalem.

West Jerusalem was seized by Israel during the 1948 Arab-Israeli war, when more than 750,000 Palestinians were expelled from historic Palestine, referred to by Palestinians as the Nakba (catastrophe) when Israel was officially founded.

Israel subsequently occupied and annexed the eastern part of the city after its military victory in the 1967 war, but its control over East Jerusalem has never been recognised by the international community.

Palestinians want East Jerusalem as the capital of a future state, while Israel says the city cannot be divided.

"This decision is against international law and against our rights as Palestinians," said Amira, his eyes bloodshot red from tear gas during the protest in Bethlehem.

"Years of negotiations in this peace process [were] based on a two-state solution, with East Jerusalem as our capital," said Amira, adding that the decision will lead to a "new intifada", or uprising, against both Trump and Israel.

"Trump did not just announce that Jerusalem is the capital of Israel. He has shown us clearly that the US and Israel are the same thing."

Some Palestinians at the protest said they had never been able to visit Jerusalem.

Israel maintains strict control over access to Jerusalem, and Palestinians from the West Bank and Gaza Strip need special Israeli-issued permits to enter the holy city.

But Alsos said he was protesting for his six-year-old daughter, whom he said "deserves to see Jerusalem".

"I want her to have a future here in Palestine," he said.

During the protest, a group of Israeli settlers came to watch and stood behind the Israeli soldiers.

Another Palestinian protester, Ramzi, who did not give Al Jazeera his last name in fear of reprisals, said that Palestinians were "thirsty" for Jerusalem and called on Trump to officially apologise to Palestinians.

"America is biased in favour of the [Israeli] occupation," the 15-year-old told Al Jazeera.

"But we are ready to sacrifice ourselves for Jerusalem. I am ready to sleep in Jerusalem's alleys until it is liberated."

Jihad, 24, who also did not give Al Jazeera his last name, said that while Palestinians have reacted with anger, their response remains limited.

"We don't have guns or planes to fight these soldiers," he told Al Jazeera.

"We know throwing these stones does not have much of an impact, but this is a symbol of our rejection of Trump's decision."

Jihad added: "How can Trump give away a land that he does not own?"