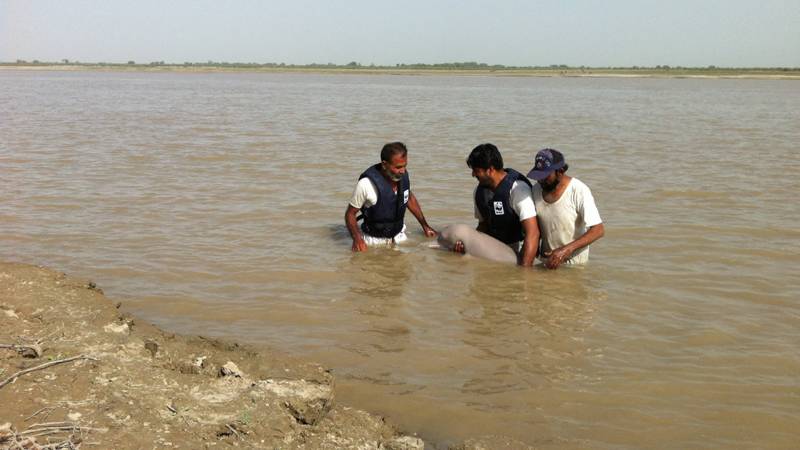 Karachi: River Indus specially in at its tail is home to one of the rarest fresh water blind dolphins which have survived ages of fishing, waterlessness, mixing of fresh water with sea Water. Now a protected species are still decreasing in number. International wildlife welfare organizations especially WWF has taken the matter very seriously.

Not a day ago a, WWF-Pakistan and Sindh Wildlife Department joint rescue team successfully rescued two stranded Indus river dolphins and released them back into River Indus two days in a row.

The first one a 3.10 feet long male dolphin weighed about 22 kg was rescued from Dahar - a tributary of Ghotki Feeder Canal, on Friday. While, the other male dolphin which was 4.7 foot long and weighted 37 kg was rescued from Wareha, a minor tributary of Rice Canal on Saturday. The rescued dolphins were carefully translocated in a sound proof ambulance modified for this purpose. One of the rescued dolphins was released in the Indus River at Sukkur Barrage upstream and second one in downstream Sukkur barrage.

Stranding in low waters is a constant threat which this endangered species faces. Stranding usually occur during the period of canal closures when flood gates are closed resulting in a drop in water level. Furthermore, intensive fishing in the core dolphin habitat is another threat which increases the probability of dolphins getting entangled in fishing nets, making it critical to continuously monitor the Indus River and adjacent canals. The Indus dolphin rescue programme, therefore, has been an integral component of WWF-Pakistan's conservation work on this species and is a continuous activity being carried out in collaboration with Sindh Wildlife Department. WWF-Pakistan has recently organised a capacity building workshop for Sindh Wildlife Department officials on the safe rescue and release of stranded Indus river dolphins.

WWF-Pakistan has initiated numerous programmes to support and protect the population of these dolphins in collaboration with partners and has rescued more than 130 dolphins since 1992. Community awareness and education has also helped substantially decrease stranding-induced dolphin mortalities in recent years. WWF-Pakistan set up the 24-hour phone helpline, 071 561 5505 which has been instrumental in further strengthening the existing dolphin rescue programme.