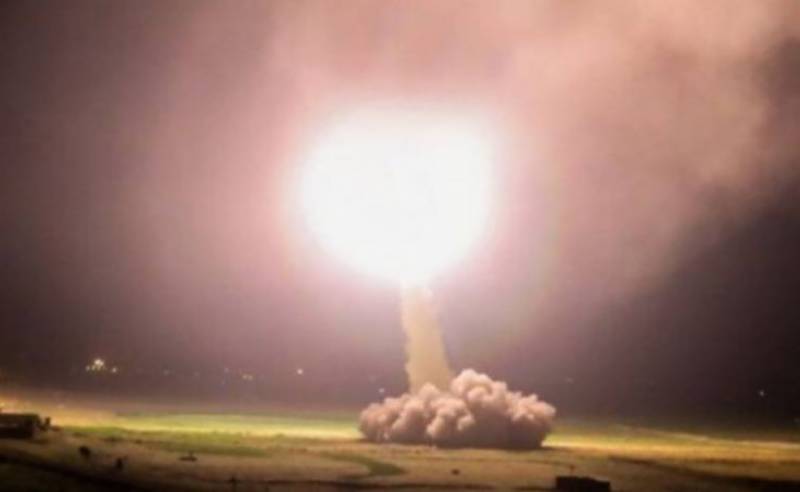 Baghdad (Web Desk): Iran fired more than a dozen ballistic missiles on US-led forces in Iraq in the early hours of Wednesday in retaliation for the killing of military commander Qassem Soleimani.

Iran's Islamic Revolutionary Guards Corps confirmed that they fired the missiles against at least two Iraqi military bases al-Asad air base and another in Erbil.

According to Iranian state television, 80 "American terrorists" were killed in the missile attack, adding that none of the missiles were intercepted.

State TV, citing a senior Revolutionary Guards source, also said Iran had 100 other targets in the region in its sights if Washington took any retaliatory measures. It also said US helicopters and military equipment were “severely damaged”.

US President Donald Trump tweeted that an assessment of the casualties and damage from Iranian missile strikes is underway and he would make a statement on the situation later on Wednesday.

All is well! Missiles launched from Iran at two military bases located in Iraq. Assessment of casualties & damages taking place now. So far, so good! We have the most powerful and well equipped military anywhere in the world, by far! I will be making a statement tomorrow morning.

In a statement, Pentagon spokesperson Grisham said that we will take all necessary measures to protect and defend US personnel, partners, and allies in the region.

US Federal Aviation Administration has decided to ban US carriers from operating in the airspace over Iraq, Iran, the Gulf of Oman and the waters between Iran and Saudi Arabia after Iran launched a missile attack on US-led forces in Iraq.

Meanwhile, Iranian Foreign Minister Mohammad Javad Zarif has termed Iran's missile attack to the US base in Iraq as a proportionate measure which came in self-defence.

In a tweet, he said Iran took measures under Article 51 of UN Charter targeting base from which armed attack against our citizens & senior officials were launched.

FM Zarif added that Iran is not seeking escalation or war but it will defend itself against any aggression.

Iran took & concluded proportionate measures in self-defense under Article 51 of UN Charter targeting base from which cowardly armed attack against our citizens & senior officials were launched.

We do not seek escalation or war, but will defend ourselves against any aggression.