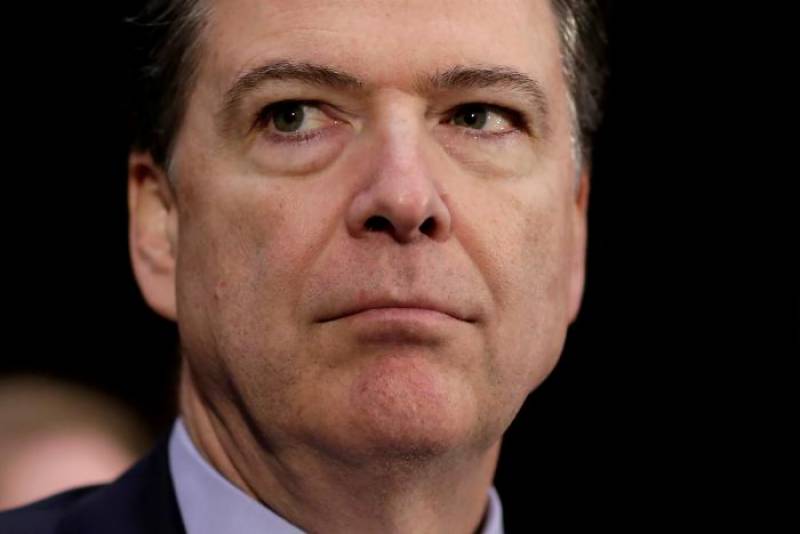 Washington (Reuters): Former Director of Federal Bureau of Investigation (FBI), James Comey said on Wednesday that U.S. President Donald Trump asked him to drop an investigation of former national security adviser Michael Flynn as part of a probe into Russia's alleged meddling in the 2016 presidential election.

In written testimony released the day before he appears before the Senate Intelligence Committee, Comey said Trump told him at a meeting in the White House in February: "I hope you can see your way clear to letting this go, to letting Flynn go."

The testimony puts more pressure on Trump, a Republican, whose presidency has been overshadowed by allegations that Moscow helped him win last year's election.

Some legal experts said Comey’s testimony could strengthen any impeachment case built on obstruction of justice, but U.S. markets shrugged off the news from the testimony for lack of any major disclosures.

To build a criminal obstruction of justice case, federal law requires prosecutors to show that a person acted with "corrupt" intent. It does not matter whether the person succeeds in impeding an investigation.

While a sitting president is very unlikely to face criminal prosecution, obstruction of justice could form the basis for impeachment.

Comey said he had told Trump on three occasions he was not being investigated, confirming an earlier account from the president.

Trump, who spent part of Wednesday in Ohio talking about the need to fix the nation's crumbling infrastructure, ignored reporters’ shouted questions about Comey. On returning to the Oval Office, Trump went into a meeting with top advisers, including chief of staff Reince Priebus.

"The president is pleased that Mr. Comey has finally publicly confirmed his private reports that the president was not under investigation in any Russian probe," Marc Kasowitz, Trump's attorney, said in a statement.

Several congressional committees, as well as the FBI and a special counsel, are investigating whether Russia tried to tilt last November's election in Trump's favor, using means such as hacking into the emails of senior Democrats. Trump and the Kremlin have separately denied any collusion.

Trump abruptly fired Comey, who was leading the Federal Bureau of Investigation's probe, on May 9.

Comey painted a vivid picture for senators of awkward encounters with Trump in seven pages of testimony.

Comey described a private dinner in the Green Room of the White House on Jan. 26, where Trump asked him whether he wanted to stay on as FBI director, telling him: "I need loyalty, I expect loyalty."

"I didn’t move, speak, or change my facial expression in any way during the awkward silence that followed. We simply looked at each other in silence," Comey said in his testimony, explaining he became concerned that Trump was trying to create "some sort of patronage relationship."

On Feb. 14, after an Oval Office briefing on counterterrorism, Trump asked Comey to stay behind, dismissing Attorney General Jeff Sessions and his son-in-law Jared Kushner, who lingered, and waving off Priebus, who peeked through the door.

"When the door by the grandfather clock closed, and we were alone, the president began by saying, 'I want to talk about Mike Flynn,'" Comey said in his testimony.

Trump had fired Flynn the previous day in a controversy over contacts between the retired general and the Russian ambassador to the United States. The FBI has been investigating Flynn as it looks into allegations of links between Russia and the Trump campaign.

On March 30, Trump phoned Comey and asked what "we could do to lift the cloud" of the FBI's Russia investigation.

"He said he had nothing to do with Russia, had not been involved with hookers in Russia, and had always assumed he was being recorded when in Russia," said Comey, who had briefed Trump on "salacious material" that had arisen in a counter-intelligence investigation.

Michael Cohen, a lawyer for Trump, said in a statement that the uncorroborated dossier of compromising material that Russian operatives allegedly collected on Trump has been "debunked."

"Comey’s statement released today needs to be carefully scrutinized as his testimony claims the president was concerned about the dossier," said Cohen.

Cohen, along with Flynn, has been subpoenaed by the House Intelligence Committee, which is also conducting a Russia probe.

Some legal experts said Comey’s written statement could be used to show that Trump engaged in obstruction of justice.

At least 18 killed as passenger bus overturns in Khuzdar

“It shows the president was doing everything he could to shut down the Flynn investigation,” said Andrew Wright, a professor of criminal law at Savannah Law School.

Bruce Green, a professor of law at Fordham University School of Law, said it would be difficult, however, to show that Trump intended to obstruct justice. Trump could say he was merely vouching for Flynn's character and voicing concerns about how the probe was interfering with his ability to function effectively as president, Green said.

Democrats jumped on the testimony, expressing concern that Trump had inappropriately meddled with the probe.

"It's certainly very possible that this is evidence, in combination with other actions by the president, that could amount to obstruction. It's certainly an effort to interfere in the investigation," the top Democrat on the House Intelligence Committee, Representative Adam Schiff, international media told.

But Republican Senator Richard Burr, who heads the Senate intelligence panel, said he did not take issue with Trump's request.

"I don't think it's wrong to ask for loyalty from anybody in an administration," Burr said.