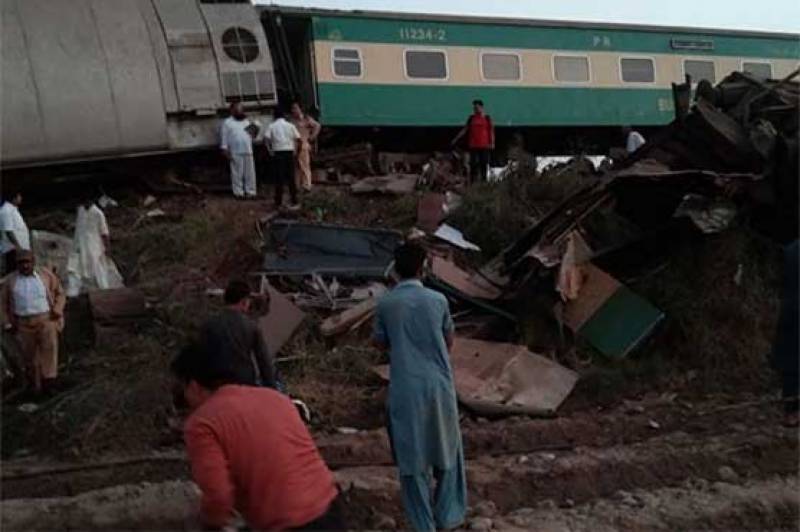 Ghotki (Web Desk): The death toll from collision of two passenger trains near Sindh's Ghotki district surged to 63 on Tuesday as eight more bodies were recovered from the crash site.

According to Divisional Superintendent (DS) Railway Sukkur Tariq Latif, the rescue operation had been completed after the government cleared the track, retrieving the 17 coaches that had been affected by the crash and the engine of the train.

He said that the up and down track has been restored and orders have been issued to resume the train service.

Tariq Latif said that trains which were unable to continue their journey since Sunday, were allowed to resume their operations

He added that the speed of trains travelling on affected routes has been kept slow for the time being.

Over 50 were killed and more than 100 were injured when two trains collided near Ghotki in the wee hours on Monday.

According to Pakistan Railways (PR) officials, bogies of Millat Express, which left Daharki Railway Station, derailed and fell on the other track and Sir Syed Express, coming from opposite direction, collided with these bogies.

The mishap occurred between Raiti and Obaro railway stations.

On Tuesday, the death toll rose after seven more bodies were recovered from the crash site.

Out of the 100 injured in the accident, some of them are expected to be in critical condition.

Meanwhile, a private news channel quoted an initial investigation report into the incident which revealed on Tuesday that the train accident took place when the welding joint of the up track's right side broke, causing 12 coaches of the Millat Express to crash onto a down track.

The Karachi-bound Sir Syed Express, as a result, collided with Millat Express' coaches on the down track, causing the accident.