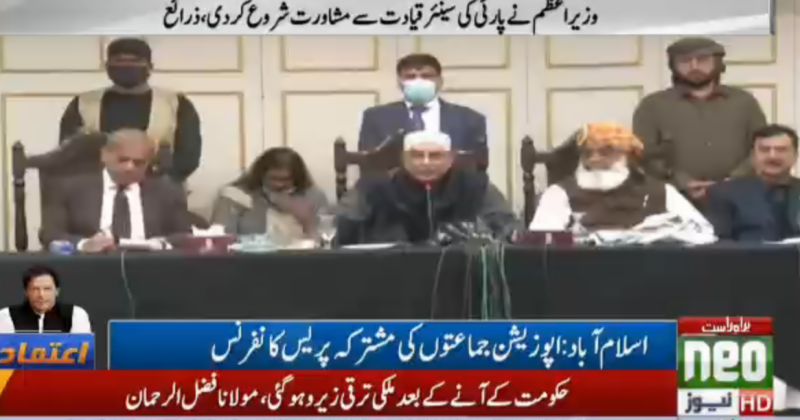 Islamabad (Web Desk): The major opposition parties are confident of having the required number of members of National Assembly (MNAs) to remove Prime Minister Imran Khan.

Speaking on the occasion, Shehbaz Sharif explained the need for the no-confidence motion against Imran Khan.

He said that the opposition parties have taken this decision for the people of Pakistan and not for ourselves.

Shahbaz accused the PTI-led government to have "reinstalled the development projects which were initiated by the previous government and claiming them as their own projects."

“They criticised China-Pakistan Economic Corridor (CPEC) project when they were in the Opposition; however, they are now taking credit for it,” he said.

He further censured PM Imran for lambasting European Union (EU) countries over asking Pakistan to vote against Russia during a recently held special session of the United Nations General Assembly. This, he lamented, had angered EU nations.

He also lashed out at PM Imran's assertion that "foreign hands" were behind the opposition's no-confidence motion, pointing towards rising inflation and the economic crisis. "I believe no accusation can be more foolish and baseless [than this]."

The PML-N president said that the opposition had taken the step after making an informed decision. "The motion has been submitted to the NA speaker," he said, adding that it was a matter of "national interest".

He said that opposition lawmakers held meetings for several weeks and had decided that the "people would not forgive them" if they had delayed it further.

Speaking on the occasion, JUI-F chief and Pakistan Democratic Movement (PDM) Maulana Fazlur Rehman said that during the general elections of 2018, the PTI had "looted the mandate of the voters."

The PDM president said that the opposition has united due to national interest and the no-confidence motion will succeed.

He added that the opposition parties stand with democracy and aim to strengthen Pakistan.

“We believe in success and the nation will soon hear good news regarding the success of the no-confidence motion,” he claimed.

In his remarks on this occasion, PPP co-chairman Asif Ali Zardari said that the opposition decided at one point that it was "now or never".

"This is continuing and it will worsen to such an extent where no one will be able to rectify it," he said.

The PPP co-chairman said that the opposition consulted each other and came to the conclusion that a single party could not take the country out of this "difficult situation". "We will all have to work together."

Asif Zardari said that the opposition had the numbers it needed, saying: "We will get more than 172 votes."

Earlier on Tuesday, the opposition parties submitted the no-confidence motion against Prime Minister Imran Khan in the National Assembly.

Lawmakers from opposition parties including Ayaz Sadiq, Saad Rafique, Maryam Aurangzeb, Rana Sanaullah, Shazia Murree, Naveed Qamar and Shahida Akhtar Ali and Alia Kamran were among those who reached the parliament to submit the no-confidence motion.

PML-N spokesperson Marriyum Aurangzeb said NA Speaker Asad Qaiser was not present in his office which is why the document was submitted with the secretariat.

On the other hand, PM Imran reaffirmed his firm commitment to continue the fight against corrupt mafia in order to bring them under the ambit of law.

Addressing an event in Rawalpindi in connection with International Women's Day, he said no NRO will be given to the corrupt elements. He said this fight is also important for protection of rights of weak segments of the society including the women.

The premier said that all designs and attempts by the gang of corrupt politicians against the government would meet a failure.

PM Imran says will not resign under any circumstance and will ...