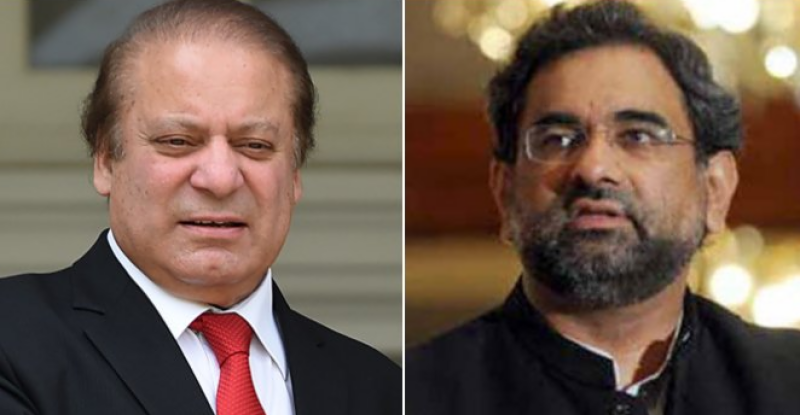 During the hearing, former premier Abbasi's lawyer requested the court to adjourn the hearing and fix it for after the by-polls scheduled for October 14. Accepting the request of the former premier's lawyer, the bench adjourned the hearing till October 22.

The court further instructed removal of the journalist Cyril Almeida’s name from the Exit Control List (ECL). The bench remarked that the directives were issued to ensure the journalist appeared before the court.

Meanwhile, tight security arrangements were made on this occasion and heavy contingents of Rangers and police were deployed outside the court during the hearing. Several Pakistan Muslim League-Nawaz (PML-N) workers were also present outside the LHC premises and surrounded Nawaz when he reached the court.

On September 24, the Lahore High Court (LHC) ordered former prime minister Nawaz Sharif and journalist Cyril Almeida to appear before the court on October 8 in a treason case.

A treason petition filed by Amina Malik, a civil society member, seeks action against Sharif under treason charges for allegedly trying to defame state institutions in an interview to a English daily, as well as action against former prime minister Shahid Khaqan Abbasi for allegedly not honouring his oath of office by disclosing the minutes of a National Security Council (NSC) meeting to Nawaz.

Abbasi appeared before the court to attend the hearing, while two other accused were absent.

The court also raised questions over Nawaz’ absence from the proceedings, to which, Sharif’s counsel Advocate Naseer Bhutta informed the court that his client was unable to attend the hearing as people were frequently visiting him to condole the death of his wife Begum Kulsoom Nawaz . He also urged the court to hold next hearing of the case after the Chehlum (fortieth day her death).

The judges directed that the ousted premier appear before the court in accordance with law and summoned him on Oct 8.

Expressing anger over Almeida’s absence, the LHC had issued non-bailable arrest warrants for the journalist and adjourned the hearing until October 8.