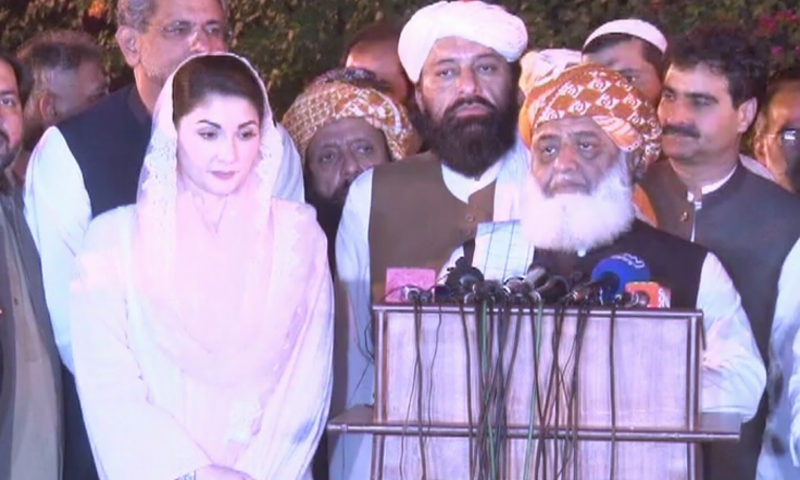 Maryam Nawaz congratulated Maulana Fazlur Rehman for becoming the first president of the alliance, saying “we are very delighted to have you as the PDM president.”

Talking to media jointly with Maryam Nawaz, Maulana Fazlur Rehman said that the PDM has no clash with Pakistan Army.

"If there is a problem, it is not from our side,” the JUI-F chief said.

The PDM president said that a historic movement will start on October 16 in Gujranwala that will lay the foundation of ousting ‘the most incompetent government’ in the country’s history.

The JUI-F chief added that a legitimate constitutional government will be formed in the wake of the opposition’s movement as the people were looking up to the opposition and the PDM will succeed in this struggle.

He termed He termed the Imran Khan-led government “incompetent and selected” which he added had made people’s lives miserable because of unprecedented price hike and inflation.

Fazlur Rehman said that that every hurdle in the way of the opposition’s protest would be overcome.

Speaking to media, Maryam Nawaz criticised Prime Minister Imran Khan for his statement in which he said that India is happy because of Nawaz Sharif's speeches.

Speaking about the PDM's upcoming public rally in Gujranwala, Mryam said that the government had already gotten scared of the movement. She said that the people of Pakistan were looking towards the PDM with hopes.

"Insha'Allah, I want to assure people that we will not fall short of their expectations under the leadership of Nawaz Sharif and Maulana Fazlur Rehman," she said.

Earlier, the PDM had announced its new scheduled to hold public rallies.