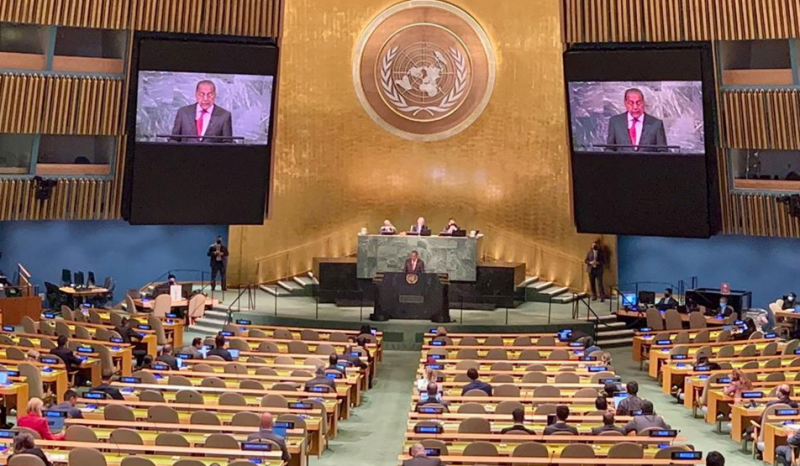 United Nations (Agencies): The United Nations General Assembly has adopted a resolution expressing support for Pakistan and strengthening of emergency relief, rehabilitation, reconstruction and prevention in the wake of the recent devastating floods.

The resolution was proposed by Pakistan and cosponsored by 159 countries to demonstrate solidarity with millions of people in Pakistan affected by the recent devastating floods.

While introducing the resolution, Pakistan's Permanent Representative at UN Munir Akram highlighted that Pakistan is one of the most climate vulnerable countries in the world, even though our carbon emissions are less than 1 percent of global emissions.

He also expressed Pakistan’s gratitude to all those who have provided assistance, and referred to the upscaled Flash Appeal and the preparation of a Plan for Reconstruction with resilience.

Ambassador Akram asked for continuous support to Pakistan on ground of solidarity and climate justice.

The UNGA president expressed solidarity with the people of Pakistan and reminded that "climate catastrophe" is still unfolding in Pakistan, which he called an “epic tragedy.

Recalling his recent visit to Pakistan, the UN chief said he did not only see the devastations caused by the floods. "I saw the best of humanity. I saw the immense generosity and solidarity of neighbours and strangers helping one another," he said. "So, people themselves have risked and lost all their worldly possessions to rescue others," the UN chief added.

"Nearly 1,500 health facilities have been devastated, greatly hindering the ability to detect and respond to outbreaks. More than 2 million homes were damaged or destroyed," the UN chief added.

Citing "climate injustice", the Secretary-General said that Pakistan is paying a "supersised price" for a climate emergency it did relatively little to create.

In his remarks, Ambassador Akram said the toll taken had been tremendous. “Over 1,700 people lost their lives and 13,000 were injured. Thirty-three million, including 16 million children are estimated to be affected by heavy rainfall. Over a million homes, 13,000 kilometers of national highways, 410 bridges and 5.4 million acre crops were damaged.”

“The total estimated damage caused by this calamity is $32 billion, 10 per cent of Pakistan’s GDP,” the Pakistani envoy said. “The World Bank estimates that as a direct consequence of the floods, the national poverty rate may increase by 4.5 to 7.0 percentage points, pushing between 9.9 to 15.4 million people into poverty and intensifying the depth and severity of poverty for already poor households.”

Under the terms of the resolution, the Assembly stressed the need for continued cooperation between the Pakistani government and the relevant organizations throughout the ongoing relief operations, and rehabilitation and reconstruction efforts, in a manner that enhances resilience and reduces vulnerability to future natural hazards.

It calls for full support and assistance to the Government of Pakistan in its efforts to mitigate the adverse impacts of the floods and to meet the medium- and long-term rehabilitation and reconstruction needs.

The resolution also calls on the international community to “scale up its humanitarian assistance and rehabilitation of Pakistan, in order to repair and strengthen the country’s prospects for achieving sustainable development and encourages member states, the UN and humanitarian organizations to continue to work together to address the different needs of affected populations, particularly the most vulnerable”.

Meanwhile, Prime Minister Shehbaz Sharif has welcomed adoption of a resolution by UNGA in support of reconstruction efforts in Pakistan.

In a tweet on Saturday, the premier said that the world should respond vigorously to the UN revised aid appeal and provide access to climate finance and debt relief to Pakistan. PM Shehbaz stressed that these actions are critical at this stage.