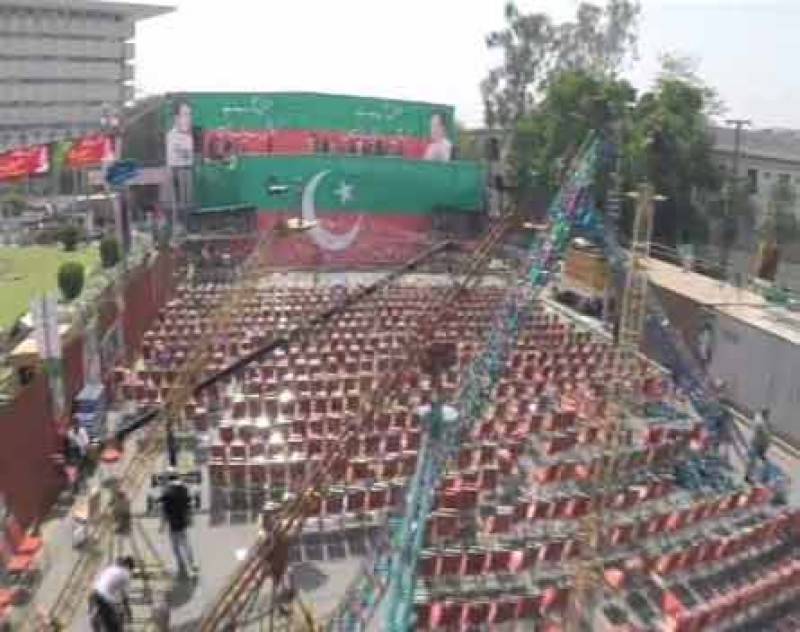 Lahore (Staff Report): Arrangements are being made for a Pakistan Tehreek-e-Insaf (PTI) rally on Jail Road on Friday.

According to details, PTI chief Imran Khan is expected to address the gathering, set to held today, around 6pm where the organisers have set up several chairs, a 20ftx50ft stage and are putting up a sound system.

The district administration said they would not give permission to block a main road of the city for an entire day, adding that they will give their full cooperation if the party decides to hold their gathering at any other venue.

Despite the disapproval of district government the party decided to hold the rally at Qurtaba Chowk, Jail Road.

On Thursday, the deputy commissioner (DC) recommended the party leaders to hold their political gathering at an alternative venue than Jail Road.

Meanwhile, the PTI leadership reiterated that the party will hold its rally for the NA-120 by-election campaign at Jail Road, adding that the district administration should ensure appropriate security at the venue.

It is pertinent to mention that the NA-120 seat fell vacant after the disqualification of Nawaz Sharif as prime minister as a result of the Supreme Court verdict in the Panama Papers case on July 28.

A tough contest is expected between the PTI candidate Yasmin Rashid and Nawaz's wife and Pakistan Muslim League-Nawaz (PML-N)'s Kulsoom Nawaz on September 17.

In light of the former first lady's ongoing medical treatment in London, her daughter Maryam is spearheading the campaign.

Meanwhile, the printing of ballot papers for the NA-120 by-election is under way. The process is being monitored by the army.

The ECP said a total of 350,000 ballot papers are being printed for the by-poll, where 324,786 voters are registered to cast their vote.

Moreover, the army will be responsible for the storage and distribution of ballot papers to the polling stations.