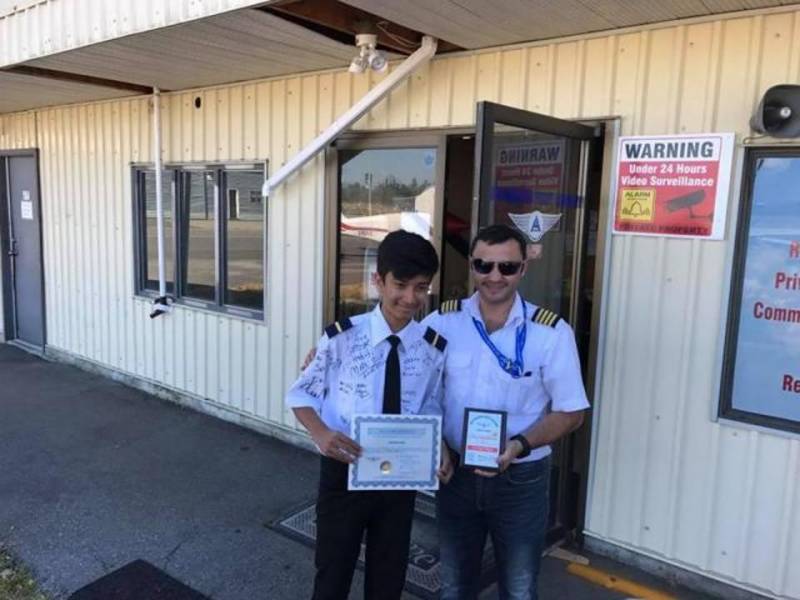 Khaleej Times reported Mansoor told, “With the simulation software, uncle began training me how to fly a plane. Since then I’ve had an interest in it.” At the age of 13, Mansoor decided to take flying as a career. Then less than a year later he visited Canada with his mother to start training at AAA Aviation Flight Academy in British Columbia.

At first, the chief flight instructor of the academy was hesitant to take such a young boy but then the passion of Mansoor convinced him.

“At first, the CFI wasn’t ready to take me. But after my first flight, he was very excited to teach me because he found that I knew much and learned fast, Mansoor said, “But it wasn’t so easy. Flying is a different feeling than the simulator. What I had learned from my uncle helped me a lot. For example, there were some theoretical things, like with the instruments, that he had taught me to use beforehand.”

On 30 August 2017, the youngster made history by conducting his first solo flight in a Cessna 152.

Mansoor shared experience of his first flight, “I was a little nervous, but I was ready to fly. I was excited. “The flight was about 10 or 12 minutes. I was most nervous about the landing. It’s really tough. It had taken me much time to learn how to land properly.”

He said, “My family was really proud of me, and my friends were really happy for me. They now want to see me in school.” He is also receiving an overwhelming response on his achievement by people around the world.

Mansoor also broke record of least amount taken in training by a young pilot before his solo flight. The last record was of 34 hours which Mansoor broke by having just 25 hours training.

Mansoor was confident to take flying professionally in the future “I want to be an airline pilot. My dream airlines are Emirates and Etihad.”