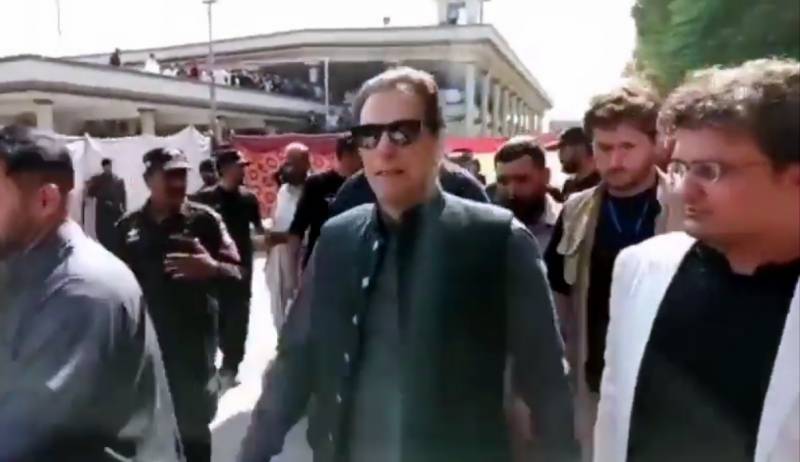 The court in its decision said that the learned counsel for the respondent took us through the supplementary response filed by the respondent and submitted that it was an explanation of the speech in relation to which contempt proceedings have been initiated,” it stated.

The IHC bench maintained that it considered the response filed by Imran and did not find it satisfactory.

"We are not convinced that the respondent has purged himself of the wrongdoing alleged against him in relation to which the show cause notice was issued," the court added.

During the hearing today, IHC Chief Justice Athar Minallah observed that PTI Chairman Imran Khan's replies to the court’s show-cause notice appeared to be "justifying" contempt of the judiciary and showed "no remorse or regret".

“Would you have submitted the same reply if these words were used for a Supreme Court or a high court judge?” the IHC CJ asked.

Subsequently, Justice Minallah said that the judges of district courts were more important than those of the high court or Supreme Court.

"Often times, the matter is not as serious as it is understood to be," Hamid contended, admitting that Imran didn’t use the word “action” in his diatribe against the female judge in the correct way.

Justice Babar Sattar asked Imran's counsel if legal action under the Contempt of Court Act could be publicly commented on.

Hamid replied that every citizen had the right to initiate legal proceedings, adding that the word action didn't necessarily mean to threaten. "We assure the court that no one was threatened," he maintained.

Justice Sattar also observed that the words used by Imran were "threatening".

However, Imran's lawyer argued that his client had stated multiple times that he was never against the judiciary.

He said that the PTI chief ran a campaign for the freedom of the judiciary.

Hamid Khan clarified that the PTI chairman's aim was not to use harsh words against the female judge.

Upon this, Justice Sattar said that Imran was still trying to justify what he had said.

Hamid contended that there is a difference between a justification and a clarification. "This is what I am trying to tell you," he said.

To this, Justice Sattar asked: "Does Imran Khan want a fair trial? Is this why he has submitted this response?”

Imran's lawyer replied that his client wanted the contempt case to be wrapped up.

Justice Minallah observed that Imran Khan was taking a very "risky' stance. "The apex court had also warned the PTI chief of contempt,” he recalled. “You are now once again saying that you won’t do this in the future.”

The IHC CJ reiterated that even now Imran wanted to justify his remarks, adding that the case of Pakistan Muslim League-Nawaz's (PML-N) Nehal Hashmi was similar to the one at hand.

"Nehal had not taken the name of any judge."

He went on to ask why the judges of the lower courts were considered different to those of higher courts. "You are justifying contempt of court which means that you have no remorse or regret," the judge observed.

Justice Babar Sattar also noted that Imran had not shown any remorse through his behaviour.

During the hearing, Hamid also said that hurling a threat at the female judge was not Imran’s objective as he has always stood up for the rights of women.

Justice Minallah said the case was not about women’s rights but was about the judge of a lower court.

At one point, the IHC CJ remarked that he didn’t care if the courts or judges were sidelined.

“But here, the matter is of criminal contempt on which notice is taken across the world. We will too,” Justice Minallah said, saying that this contempt could affect the people’s trust in the judiciary.

He said that Imran had called on his supporters to gather outside the court. "We have repeatedly told you to submit a well-thought out response."

Imran's counsel said that his client had used the word regret in his response on the court’s orders, once again asking the IHC to dismiss the case.

"We can assure the court that Imran Khan will be more careful in the future," he said, concluding his arguments.

Hamid said that two apex court judgements had also been attached with the reply. “We want this case to be wrapped up now,” he said.

Hamid also referred to the case of firebrand PML-N leader Daniyal Aziz, who was convicted by the SC in 2018 for contempt.

"At the previous hearing, the IHC had instructed us to review contempt cases in the SC," he said, adding that the court had also referred to the cases of Aziz and Talal Chaudhry.

However, Imran’s case is different from the other two cases, Hamid said.

Upon this, Justice Minallah remarked that there were three types of contempt of court charges: judicial, civil and criminal.

"Those case do not fall under criminal contempt as they talked about the role of the court," he said, adding that Imran had commented on a matter that was sub-judice.

"We have not initiated contempt proceedings in an attempt to scandalise the court," the IHC CJ said, pointing out that the criminal contempt was an offence that was "serious in nature".

Justice Minallah said that ignorance was irrelevant in case of criminal contempt. “We had explained to you this this was [a case of] criminal contempt,” he remarked, adding that the PTI chief had been directed to think before submitting a reply.

“We are defenders of freedom of expression but incitement cannot be allowed,” Justice Minallah said.

He said criminal contempt of court was “a very sensitive matter”, adding that the district court was a “red line” for the court. He observed that the law had outlined a procedure for when a person was aggrieved by the judgement of the court.

Our society is so polarised that followers insult opponents in public places, Justice Minallah said. “If they do the same thing with a judge, then what will happen?” he asked.

He maintained that the independence of the judiciary was the court’s top priority. The court also asked Imran whether he tried to justify his actions in his reply submitted to the IHC.

"We have tried to provide an explanation and not a justification," Imran's counsel Hamid replied.

Reminding Imran of the court directives at the previous hearing, the IHC chief justice said: "The offence is serious in nature. We had explained it last time, but you did not understand."

The IHC chief justice questioned whether a former prime minister could claim ignorance of the law as a defence.

Attorney General of Pakistan (AGP) Ashtar Ausaf, in his arguments during the hearing, said that he had the transcript and video recording of Imran's speech.

"Even in his speeches later too, Imran had passed the same comments against the female judge," he stated. "He thinks that if the SC forgave him once, it will do the same again and again."

Ausaf also pointed out that Imran did not submit his response with an affidavit.

Meanwhile, Munir A. Malik, amicus curiae for the court, said the contempt law had been used to strengthen the judiciary. “It is true that there are judgments of the Supreme Court in contempt of court cases, but it is also true that this law is constantly evolving.”

He said that the words spoken outside the court could never impact the IHC.

"The words are disappointing, but not an obstacle to the dispensation of justice," he added and opined that the contempt proceedings could either be quashed if an apology was tendered or better conduct was shown.

No backchannel diplomacy between Islamabad and New Delhi, says Khar

Malik, subsequently, requested the court to wrap the contempt case in light of the reply submitted by Imran.

In his arguments, Makhdoom Ali Khan, another lawyer assisting the IHC, said that public interest lied in both dispensing justice and the freedom of speech.

"In America, a president had called a court decision the worst," he highlighted, going on that the judiciary there had shown restraint and taken out a second way out.

Here, Justice Minallah said that the same country had also suspended Donald Trump’s Twitter account for inciting followers. “This is the reason why we are saying the choice of words is very important for a political leader,” he said.

However, Makhdoom contended that the remarks of a leader, made at a rally, could not affect the court’s proceedings, saying that further time could be granted to the PTI leader.

"Imran should use the words of regret and apology in his detailed reply," he said, urging the court to show “magnanimity and pardon the PTI chief".

To this, Justice Minallah asked if someone’s ego was more important than the prestige of the judiciary and pointed out that Imran did not even tender an unconditional apology in his response.

In his fresh plea, the PTI chief argued that the high court cannot exercise suo moto jurisdiction as per the Constitution.

The arguments on the inadmissibility of the contempt case should be kept on record.

On Wednesday, the former premier submitted a second reply in contempt of court notice issued by the IHC against him for allegedly threatening a judge.

On August 23, the court summoned Imran on August 31 and issued him a show-cause notice.

A day before the hearing, the former prime minister submitted a reply before the IHC wherein he expressed his willingness to “take back” his words about the judge if they were “regarded as inappropriate” and pleaded before the IHC that the judges who had agreed to initiate the case against him should consider withdrawing themselves from the bench as, according to him, they had pre-judged the matter.

However, the IHC had deemed the response to be “unsatisfactory” and asked the PTI chief to submit a “well-considered” response. Following this, Imran on Wednesday submitted a fresh reply in the court.