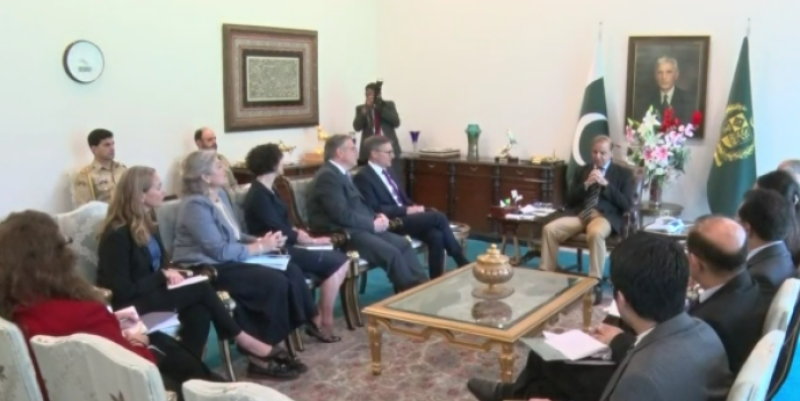 Speaking on the occasion, the premier underlined that Pakistan is committed to deepen and widen its ties, especially in the areas of security, health, climate change, trade and investment.

PM Shehbaz emphasized the need for a constructive and sustained engagement between the two countries, based on the principles of mutual trust, respect and understanding.

In the regional context, the prime minister stressed the importance of a peaceful and stable Afghanistan, and called for unfreezing of the Afghan assets.

He also emphasised the need for enhanced engagement with the Afghan authorities.

Underlining Pakistan's commitment to promote peace in the region, including with India, PM Shehbaz highlighted the need for resolution of long-standing Jammu and Kashmir dispute, as per the United Nations Security Council (UNSC) resolutions and the wishes of the Kashmiri people.

He added that over 33 million people have been affected more than 1,300 lives lost and immeasurable damage was caused to agriculture, livestock, property, and critical infrastructure.

The prime minister underscored that rehabilitation and reconstruction would pose formidable challenges.

"Continued support, solidarity and assistance from the US, a country with which Pakistan has a long-standing relationship, IS crucial in this context," the premier said.

While highlighting the devastating impacts of climate change on our planet, PM Shehbaz called for stepping up international efforts to meet climate goals, including mobilizing climate finance to better cope with this challenge.

On behalf of the Biden Administration, Derek Chollet affirmed that the US would stand by Pakistan in the wake of this immense challenge, extend vital support, and help affected people rebuild their lives and communities.

He expressed heartfelt condolences and sympathies to the Government and people of Pakistan at the precious lives, resulting from the riverine floods.

PM Shehbaz thanked Derek Chollet for visiting Pakistan at a critical moment when the country has been adversely affected by the most devastating flood in its history, with millions affected and displaced.