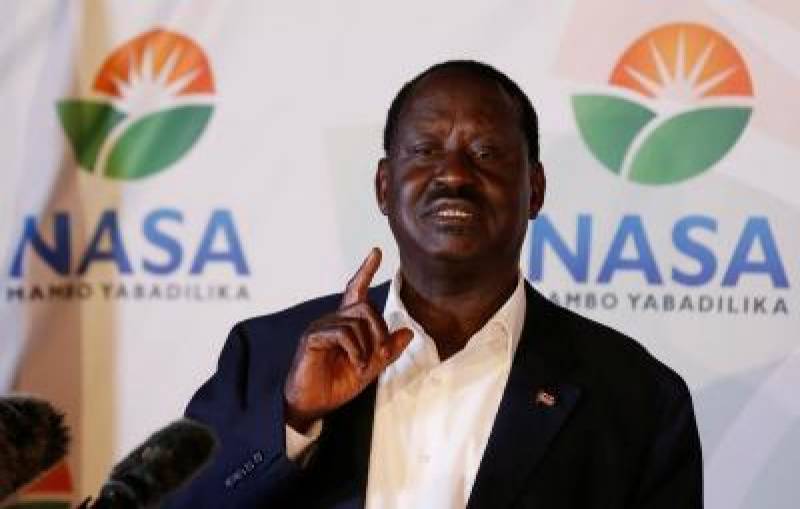 The election commission said Tuesday's vote was free and fair and it was investigating whether or not its computer systems and vote-tallying database had been compromised.

Odinga's comments raised concerns of unrest over the results in Kenya, East Africa's leading economy and a regional hub. Around 1,200 people died in violence after a disputed election in 2007.

Speaking at a news conference, Odinga urged his supporters to remain calm, but added: "I don't control the people". His deputy Kalonzo Musyoka also called for calm but said the opposition might call for "action" at a later date. He gave no details.

Shortly after Odinga spoke, police fired teargas to scatter a group of around 100 supporters in the western city of Kisumu, an opposition stronghold. The unarmed men had been chanting "No Raila, no peace".

As of 1100 GMT, the election commission website put Kenyatta in front with 54.3 percent of votes counted to 45 percent for Odinga - a margin of nearly 1.4 million ballots with more than 95 percent of polling stations reported.

Odinga published his own party's assessment of the count on Twitter, saying he had 8.1 million votes against 7.2 million for Kenyatta.

The main local election monitoring group said its parallel vote tally was incomplete so it could not comment on the differing figures. Foreign observer missions declined to comment.

Kenyatta, a 55-year-old businessman seeking a second five-year term, had held a steady lead of around 10 percent since the start of counting after the peaceful vote, the culmination of a hard-fought contest between the heads of Kenya's two political dynasties.