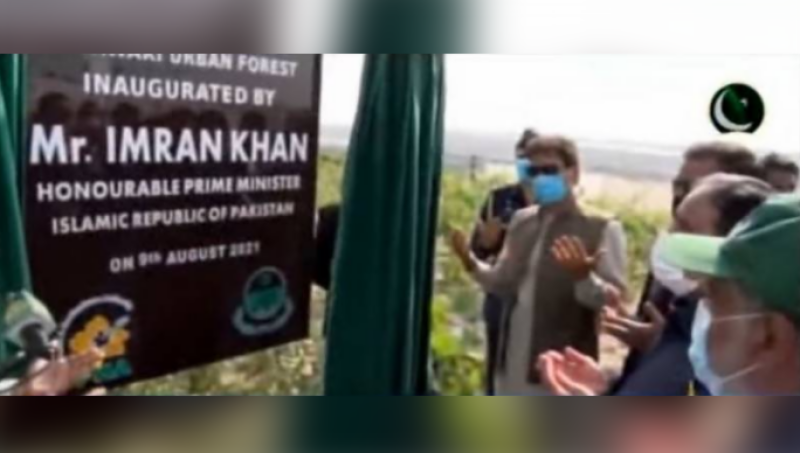 Speaking on the occasion, the premier said that the Maiyawaki forest will help to control environmental pollution and our efforts to provide a good environment to the next generations.

He said that Miyawaki plants grow ten percent faster than any other plant and this jungle has been set to grow at fifty three places in Lahore city.

PM Imran recalled that Lahore used to be one of the cleanest cities of the country, but had now become Pakistan’s most polluted city.

He noted that a mere 640 million trees were planted across the country since independence till 2013. “But, from 2013 to 2018 we planted one billion trees in Khyber Pakhtunkhwa alone,” Imran Khan said, adding that “we aim to plant 10 billion trees now.”

The premier regretted that a report by the world’s top scientists released today highlighted blatant “wastage” of natural resources by humans.

“The report indicates that the sea level has risen to a point of no return, and that citizens must take immediate steps to prevent further damage due to climate change,” the prime minister said.

Prime Minister Imran Khan also urged every citizen of Pakistan to plant a tree each.

“We must ensure upkeep of trees that we plant,” the the premier said, adding that all citizens especially students should strive for the country’s future in this regard.

The Miyawaki forest has been developed over 100 kanals with a total of 165,000 plants which will grow ten times quicker than a normal forest owing to the unique Miyawaki technique, the Radio Pakistan reported.

Another 53 Miyawaki forests are being grown at different parts of Lahore to create sinks for carbon as well as for better pollution abatement in the city.

All the projects have been geo-tagged for monitoring of their growth and development.

About 500 million trees are being planted across the country under the ongoing Monsoon plantation drive which is the largest ever such drive in Pakistan.