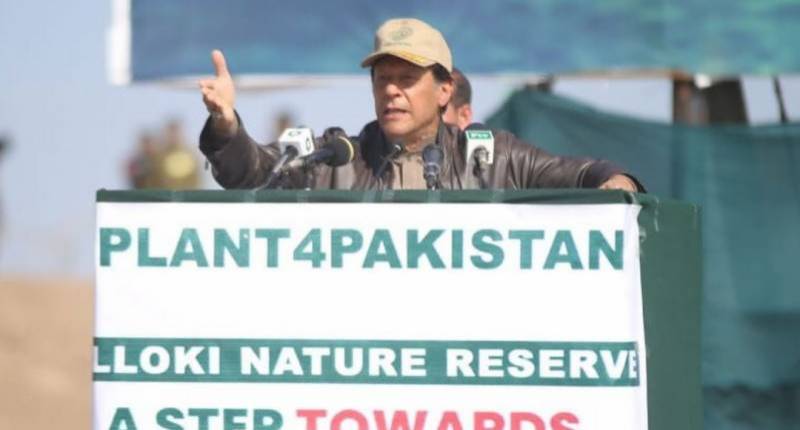 Addressing a ceremony of the launching of spring tree plantation campaign in Balloki, the PM said that the current economic situation of the country was due to the ‘two historic NROs’ offered to Nawaz Sharif and Asif Ali Zardari.

Refuting the reports regarding giving NRO, PM Imran said those who were speculating that we will give NRO to anyone should understand that it will be equivalent to treason and disloyalty to the country.

“NRO is forgiving very big suspects. Two NROs destroyed the country and our current circumstances are owing to that”, the PM said.

Khan said that the NROs gave the impression that powerful thieves are not apprehended.

“The same rulers who got NROs ruled for five years each. In the last decade, the debt mounted to Rs30,000 billion from Rs6,000 billion because no one apprehends big thieves.”, the PM said.

Rupee is depreciating due to debts, said PM Imran adding that the nation pays the ultimate cost for it. I see the responsible ones, saying how PTI had failed in five months to rectify the unstable conditions, the premier went on to add.

“The government will be revolting with the country, if it grants NRO to anyone.” “In this history of democracy it has never happened that a man becomes the chairman of Public Accounts Committee from jail and then summons the accountability watchdog (NAB) which is probing him”.

“Now no favours will be given to corrupt people,” PM Imran stressed.

While officially launching the ‘Ten Billion Tree Plantation Drive’ in Nankana Sahib on Saturday, PM Imran said that the government is set to plant ten billion trees all over the country during the next five years aimed at eliminating pollution and making Pakistan green.

The prime minister vowed that the government will undertake massive plantation across Pakistan after the retrieval of lands from the grabbers and convert them into forests.

“There is an acute shortage of forests in Pakistan as the country is at the 8th number among the countries with forest covers in the world”, the PM noted”

He said government is taking serious measures for reforestation in the country.

The PM expressed regret over the elimination of forests in Changa Manga, Mian Chunnu and Kundian by the land grabbers and vowed to reclaim these lands and convert them into forests.

He said that the pollution is aggravating in Pakistan day by day and if the solid measures are not taken on time, our next generation will suffer a lot due to excess of pollution.

The prime minister urged the youth to widely participate in the plantation campaign to make it a success to materialize the dream of green and pollution-free Pakistan.