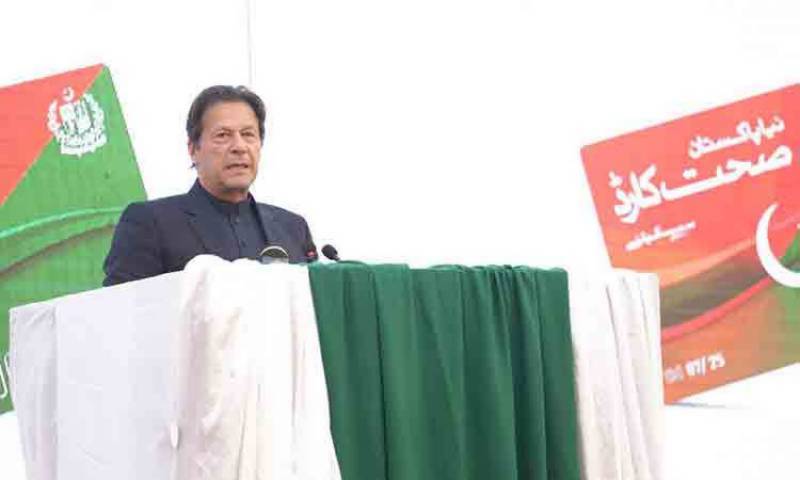 Addressing the launching ceremony, the premier said that Naya Pakistan National Health Card programme is the major step towards transforming Pakistan as a welfare state on the pattern of Riasat-e-Madina.

PM Imran said that said that a huge amount of Rs400 billion is being spent on this revolutionary project of the health sector in Punjab only.

“Keeping in view the economic condition of the country; it was not an easy task to launch such a revolutionary project for the provision of quality health treatment free of cost to the common man,” Imran Khan said.

The prime minister said that the private sector will set up hospitals in small cities and villages under the health card project for the provision of medical treatment to the masses at their door steps.

He said that the government is fully aware about its responsibilities to facilitate the women population and in this regard, more measures will be taken for their protection and granting them more rights.

PM Imran said that supremacy of law is the basis for progress of any state as in all developed countries rule of law is superior to personalities.

He announced that the corrupt opposition leaders will be brought to book, despite all their efforts to evade accountability by different means.

“The opposition leaders, who had earlier boasted to ‘tear up each other’s bellies to recover looted money, have now joined hands before any verdict is announced on their pending corruption cases,” he said, in his address here at the launch of National Health Card Programme in Faisalabad Division.

Imran Khan said his undeterred stance against corruption had put the Opposition in a haste to save the corrupt mafia.

He mentioned that former President Asif Ali Zardari had emerged in the scene with a ‘cheque book to buy loyalties of other parties’.

“This is a loud and clear message to all corrupt leaders that I will continue to fight against them,” he said, adding that the country could not prosper until the weak and powerful was equally treated before law.

He said he had joined the politics 25 years ago to wage a war against corrupt people and vowed to ensure rule of law in the country.

Imran Khan said that the rulers in past used to visit abroad “even for the treatment of their cough”, but showed apathy towards improvement of health system for the people.

He said such corrupt leaders looted money from national exchequer and transferred into the accounts of other persons to hide their crime.

PM Imran said that the population ratio of doctors and nurses in Pakistan was very less compared with the rest of the world.

The prime minister lauded Chief Minister Usman Buzdar, health minister Dr Yasmin and their team on the launch of the health insurance scheme.

“Besides providing health facilities to women, the government would also ensure their right of inheritance,” he said.

About his recent visit to China, the premier said progress on industrialization was in top focus under the China Pakistan Economic Corridor (CPEC) and expressed confidence that it would boost trade activity in the country.

Earlier, in his address on the occasion, Punjab Chief Minister Usman Buzdar said around 1.5 million people of Faisalabad, Jhang, Toba Tek Singh and Chiniot would benefit from the programme.

He said after its launch in Faisalabad Division, about 73 percent households of Punjab would be able to avail the facility.