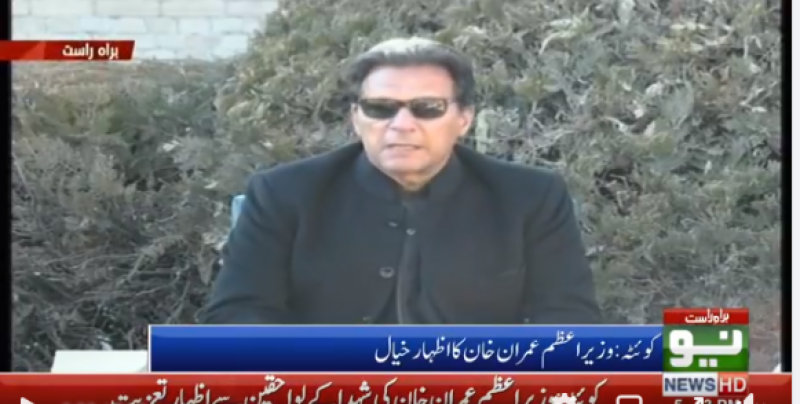 Quetta (Web Desk): Prime Minister Imran Khan arrived in Quetta on Saturday and met with the families of Hazara community coal miners who were shot dead by the terrorists in Machh area of Balochistan on January 3.

The premier extended his heartfelt condolences to all those who lost their loved ones in the tragic incident.

Speaking to the families of the Machh massacre, he assured the Hazara Community to provide them full protection and track down those behind the gruesome incident.

“A special cell is being established in the security forces to ensure the protection of Hazara community,” Khan said.

The prime minister said he and the entire nation fully shares the pain of Hazara community and stands behind them and that they will not be left alone at this critical juncture. He assured that the promises made with them will be fulfilled.

PM Imran assured that the bereaved families of Machh incident will be fully taken care of and that their demands have already been accepted.

“Government is putting in efforts to unite the nation and go after the elements trying to fan sectarian strife in the country,” he said.

The premier said that the intelligence reports strongly suggest that India wants to stoke anarchy in Pakistan by attacking the religious scholars of different schools of thought and the Mach incident was also part of a bigger game.

Appreciating the role of Inter-Services Intelligence (ISI), he said that the agency had apprehended culprits and averted several attacks that could have led to sectarian violence.

"When this incident took place, I had no doubt that it was a part of a larger game — it was a step towards spreading violence in the country," the PM said.

Prime Minister Imran Khan said he is putting in effort to unite the Muslim Ummah that is why he also strived to improve Saudi Arabia-Iran ties.

Upon his arrival in Quetta, Prime Minister Imran Khan was received by Balochistan Chief Minister Jam Kamal, provincial ministers and other high ranking officials at the airport.

Shortly after arriving, the premier met with the provincial chief minister and governor. Commander Southern Command Lt. General Sarfraz Ali was also present during the meeting.

He also chaired a meeting in which the aftermath of the Mach incident and the province's law and order situation were reviewed.

Earlier in the day, ten coal miners from the Hazara community, who were shot dead by the terrorists in Machh area of Balochistan on January 3, were laid to rest at Quetta's Hazara Town graveyard on Saturday.

On Friday night, protest sit-ins by members of Hazara community and their sympathizers in big cities of Pakistan ended after families of the slain coalminers decided to bury their loved ones following the successful negotiation with the government.

The Hazara community members were holding sit-in protest in Quetta along with the bodies of the slain miners for the past six days saying that the burials would only take place if Prime Minister Imran Khan himself visited the camp to give them an assurance that the unabated targeted killing of the Hazaras would end.