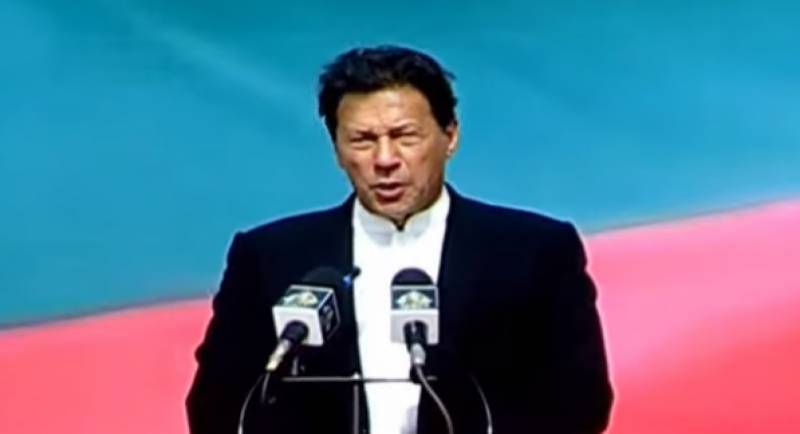 Karachi (Web Desk): Prime Minister Imran Khan on Wednesday said that former president Asif Zardari will be his 'next target' after Pakistan Tehreek-e-Insaf (PTI) and its allies foil the no-trust motion submitted by the opposition parties.

Addressing party workers and supporters at Governor House in Karachi, the premier said that the no-confidence motion against him would be the "political death" of the joint opposition.

Imran Khan alleged that Asif Zardari roams around with “buckets of money” and has kept Rs200 million to buy the PTI MPs.

The premier alleged that when one of the PTI MNA’s informed him that he was offered Rs200 million he told the lawmaker to take the money and open a panahgah or orphanage with it.

Calling Opposition Leader in National Assembly and Pakistan Muslim League-Nawaz (PML-N) president Shahbaz Sharif a “boot polisher”, PM Imran claimed that he had joined hands with the PPP as he knows that his time is up.

Calling out JUI-F’s Maulana Fazlur Rehman, PM quipped that it was a sin to call Fazlur Rehman a maulana. "Mr Diesel… prepare yourself. You warn of bringing 2,000 people if called by NAB. If the no-confidence move fails, I will bring 200,000 people," he added.

“Your time is also here. You know you will be in jail after three months. We will decrease the price of electricity after getting money back from your family,” said PM Imran Khan.

The premier said that Zardari, Shahbaz, and PDM chief Fazlur Rehman have joined hands with each other not to save the country but to save themselves from him.

He said that the government, after winning the no-confidence motion, would take Zardari, Shahbaz, and Fazl to “Pakistani jails where they should have been for a long time.

He mentioned that due to the effective policies of the government, the country witnessed record exports, tax revenue, and foreign exchange.

Imran Khan said Pakistan was in favour of maintaining friendly relations with all countries, but not at the cost of its own integrity.

He mentioned that he had not given any statement against the European Union, but reminded it that Pakistan was its ally in the war against terrorism which cost the country over 80,000 casualties.

The prime minister said the war on terror resulted in the internal displacement of 3.5 million people in the country’s tribal areas, regretting that the sacrifices were not acknowledged by the world.

“Therefore, we will support peace but will not side with any country in a war,” he said.

On the other hand, he pointed out that Zardari and Nawaz Sharif during the 10 years of their rule did not speak against over 400 drone strikes on the country.

“They did not utter a word against the drone attacks because they worship these countries as their wealth is secure and safe there,” PM Imran said, adding that they will never stand with the national interest”.

Imran Khan said the country is going in the right direction and we have gone through every challenge including Corona pandemic and provided relief to our people.

He congratulated the people of Karachi for the Green Line Bus service and Karachi Circular Railway on which work is underway.

On the other hand, the opposition parties while reacting to PM Imran's address, said that his days were numbered.

Sindh Chief Minister Syed Murad Ali Shah said that Imran Khan threatening the opposition of consequences for quite a few days. "But do whatever you have to within the next four to five days. You will not get a chance to do anything after that," Murad added.

"These are Imran Khan's last days," he said while speaking to the media in Karachi. "Your (PM Imran) time is up, it is now our time to work for the people," the Sindh CM said.

Speaking to newsmen in Islamabad, the PML-N leader said that Imran Khan spoke about opposition's political death, but his address made it apparent that his own political death is imminent.

"Imran Khan's remarks were a sign that his mental condition is not stable," Maryam said.

He visited MQM-Pakistan's head office at Bahadurabad and held meeting with leadership of allied party.

The move comes following the no-confidence motion against Prime Minister Imran Khan which was submitted in the National Assembly on March 8.