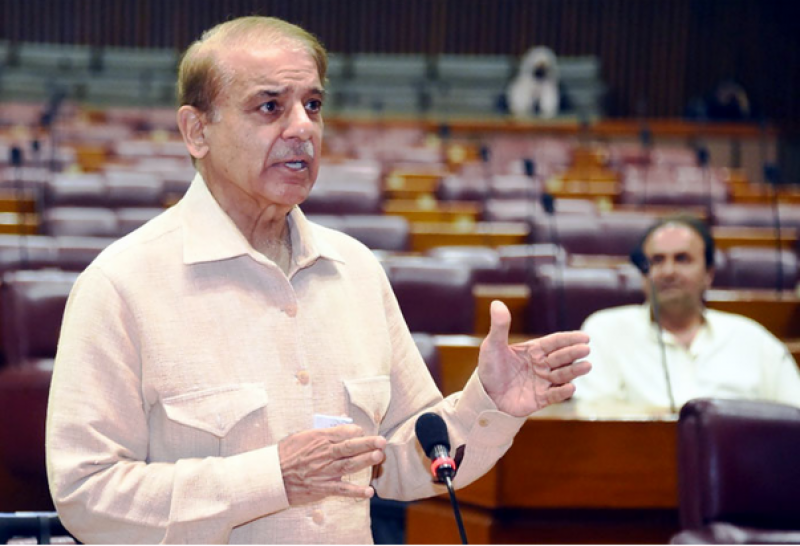 Islamabad (Web Desk): Prime Minister Muhammad Shehbaz Sharif Monday said that the statement by former PM and Pakistan Tehreek-e-Insaf (PTI) chairman Imran Khan against a national institution was in fact a conspiracy against Pakistan and the institution, which needed to be stopped immediately to avert chaos.

The premier, in his address during the National Assembly session, said if the situation was not controlled, Pakistan could meet a fate like Syria and Libya.

He said the same institution at the target of Imran Khan’s criticism, had extended unprecedented support to Imran Khan’s government which he was now referring to as Mir Jafar.

“If it was not stopped using constitutional and legal means, it can lead to chaos. He (Imran Khan) wants to wind up the democratic system. Notice should be taken of his remarks. This should be controlled otherwise no one will be spared,” he commented.

Referring to the PTI chairman’s narrative of regime change conspiracy by the United States, the prime minister said Pakistan’s ambassador in Washington had explained that the conversation (with the US official) was threatening but it had nothing to do with any conspiracy against Imran Khan’s government.

Citing examples from history of threats to Pakistan, the prime minister said Henry Kissinger had threatened Zulfiqar Ali Bhutto to roll back the nuclear program, US official Richar Armitage threatened that time Pakistan officials after 9/11 and Russia wrote a threatening letter to Yahya Khan.

“Every day, we hurl threats to India and India does the same to Pakistan. Should we call it a conspiracy?” he commented.

PM Shehbaz said it was Imran Khan who had wished Narendra Modi to win the election in India hoping that he would be helpful to resolve the Kashmir dispute but the latter, even did not responded his call.

He said the letter by the ambassador was also read out at the National Security Committee, which too, in a communique said to have found out no clue of any conspiracy.

Speaking on the floor of the House, Federal Minister for Defence Khawaja Muhammad Asif expressed the resolve to defend the state institutions at all costs and nobody will be allowed to malign them.

He said that Imran Khan is using inappropriate language against the armed forces and other constitutional institutions, which is condemnable.

The minister said that the armed forces of Pakistan are the guarantors of country’s security, while Imran Khan is trying to create differences among the state institutions. He said Imran Khan has become a security risk.

He said that Imran Khan has nothing good on his credit to convince the people to support him.

Khawaja Asif said that the PTI chief is making a futile effort to save his politics by using religious and anti-American cards.

Meanwhile, the National Assembly on Monday unanimously passed a resolution condemning malicious campaign against the state institutions of National Security.