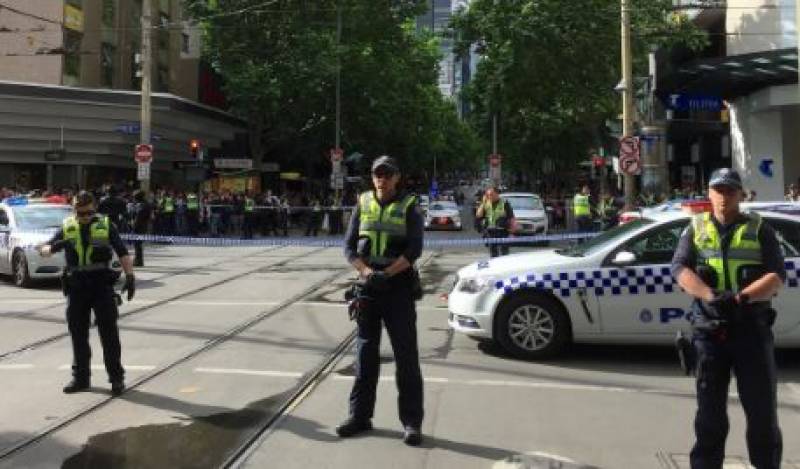 Melbourne (Agencies): A Somali immigrant killed one person and wounded two others in a rush-hour stabbing spree in the heart of Australia’s second city Friday, labelling it a terrorist attack.

According to police, the unnamed man drove a 4X4 truck loaded with gas bottles into the bustling city centre of Melbourne, ignited the vehicle in a ball of flames and then attacked passers-by with a knife, police said.

He stabbed three people before being confronted by armed officers who eventually shot him in the chest. One victim died at the scene and the attacker died later in hospital.

Counter-terrorism police and intelligence officers are still piecing together how the incident occurred, but said the attacker was known to intelligence services.

Islamic State (Daesh) — which often claims responsibility for such attacks — said via its propaganda arm that the perpetrator was an "Islamic State fighter and carried out the operation."

Witness footage showed police struggling for at least a minute to corral the towering man — who was wearing a dark tunic — as he lunged, slashed and stabbed wildly at two officers.

At least two members of the public bravely stepped in to help police. One man was armed with a cafe chair while another — swiftly dubbed an "Aussie hero" on social media — repeatedly tried to ram the suspect with an empty metal shopping cart.

But as the attacks continued unabated, before one officer opted for lethal force, shooting the suspect in the chest.

The police officers are being treated for cuts and scrapes and are not thought to be in a serious condition.

"We are now treating this as a terrorism event," said Victoria Police Chief Commissioner Graham Ashton, who said the suspect was "someone that is known" to police through family connections.

The unnamed assailant was said to reside in Melbourne´s northwestern suburbs, but had come to Australia from Somalia in or around the 1990s, when the country was ravaged by a civil war.